If you were to only look at the box score for the Dallas Stars and Tampa Bay Lightning game — 1-0 in favor of Dallas — you might assume it was another boring, low-offense game in which the Stars turtled their way to victory.

You could not be more wrong.

Sure, the Stars’ power play was pretty lackluster (as usual), but Luke Glendening and the Stars’ penalty kill made up for it with several scoring chances of their own. At even strength, the Stars put consistent pressure on Tampa Bay throughout all three periods, a rarity for a team that tends to play flat in at least one each night.

The only reason the Stars didn’t score for the first fifty five minutes was because Andrei Vasilevskiy was incredible in net. And the only reason that sole Roope Hintz goal was enough was because Scott Wedgewood was even better — the Stars’ backup goaltender improved to 3-0-1 in Victory Green, making big saves all the way up to the final buzzer.

The win keeps Dallas within one point of the Nashville Predators for the first Wild Card spot, who also won 1-0 tonight. Perhaps more importantly, it makes them tied with the Los Angeles Kings with two games in hand — overtaking them completely will prevent the Vegas Golden Knights from possibly bumping Dallas out of a playoff spot.

Dallas will look to build off of this strong game on Thursday when they take on the Minnesota Wild. Puck drops at 7:00 PM CT. 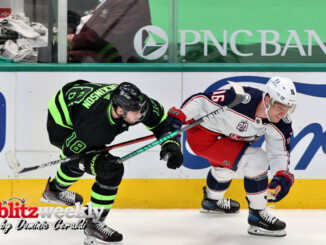 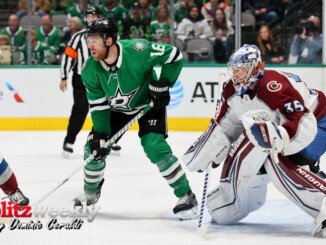 Joe Pavelski leads Stars over Avalanche with 2 goals in 20 seconds.