d no time getting the party started — Joe Pavelski started the festivities by scoring on the very first shot of the game, a nasty backhander.Not much later, Denis Gurianov would go to the penalty box for interference, giving Minnesota a chance to tie things up. Instead, Esa Lindell intercepted an up-ice pass from Cam Talbot, skated it up, and shot it through the five-hole on the second shot of the game.

Dallas killed the rest of the penalty, but soon Kirill Kaprizov found Ryan Hartman all alone up front, allowing him to put the Wild on the board for the third goal in just five and a half minutes.

After that, the teams decided to ease up on the scoring for the time being. Roughly 12 minutes in, when Jason Robertson got called for interference, but the Dallas PK stood strong once more. A couple minutes later, Radek Faksa gave away the puck behind the Stars’ net, leading up to a Kevin Fiala goal to tie things up.

But never worry — just a minute later, Denis Gurianov came flying up down the side on a rush, passing the puck back to Tyler Seguin who sent it top shelf to reclaim the lead:

The remaining three minutes, sadly, were scoreless. Jon Merrill got called with 47 seconds left for, you guessed it, interference, but Dallas didn’t convert, sending to intermission with only a measly five goals scored.

Jason Robertson fanned the puck with a wide open net early in the second, keeping Dallas from their fourth goal of the night. After some back and forth for several minutes, the Stars would get a chance to redeem themselves when Joel Eriksson Ek was called for interference holding. And that they did, with a snipe from Roope Hintz from the faceoff circle.

Jani Hakanpää soon helped crash Eriksson Ek down to the ice and into the boards, causing a scuffle between Jamie Benn and Marcus Foligno that sent both the the box for holding. Only thirty seconds into the 4-on-4, however, Hartman was called for holding against Michael Raffl, followed by the former Star to cross check Radek Faksa, giving him another two minutes.

Believe it or not, the Stars did not score despite the ensuing four minutes of power play time, although they almost did second afterwards when Pavelski was robbed by Talbot. Later, with about two and a half minutes left, Kaprisov did Kaprisov things, catching Jake Oettinger in a bad position and cutting their deficit by one.

That would be it for a — comparatively — quiet second for both teams, with only one goal apiece.

If you thought things would cool off in the third, you would be dead wrong — just over two minutes in, Seguin forced a turnover which let Gurianov set up Jacob Petersen for his fifth of the season and the Stars’ fifth of the night:

The Wild failed to score again as time slowly wound down, prompting them to pull Talbot with 9:20 remaining. Seguin failed to score of the night as he hit the post despite the empty net, and later Alexander Radulov went to the box with 5:43 left for cross checking. With a 6-on-4, Fiala potted his second to cut into the Stars’ lead.

Despite the Wild’s best efforts, however, they were not able to land another. Talbot was forced back onto the ice after an icing with 2:30 left — which, by the way, is dumb — and a minute later Jamie Benn scored the PAT from the Stars’ own zone to finish off the the game. 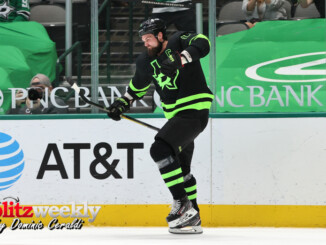 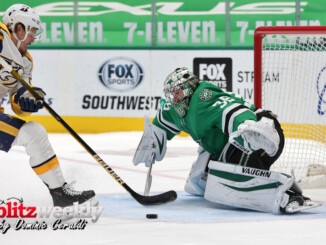 Stars lose in shootout to Predators 4-3 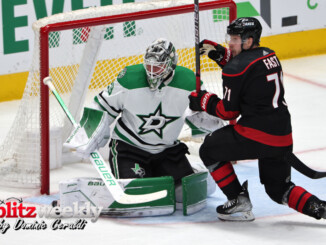 Stars lose back to back games in OT, Hurricanes Win 3-2