Another crazy game, right? Shoot-out between Peyton Manning and Tony Romo, and when it comes to a shoot-out game, it really isn’t a team game anymore, it’s all the quarterback. And the reason why I wasn’t upset with the loss, and am seriously looking forward to seeing what comes down the road, is the return of Tony Romo. He threw the ball with authority. He was leading guys, putting the ball into tight windows, and moving in the pocket, allowing guys to get open. So he threw a pick. One interception. That’s now two on the season. This one, led to the Broncos’ kicking the game winning field goal, that’s what sucks. But really, if you complain about Romo’s mistake, and there was only one in this game, without mentioning his stellar game filled with everything, everyone wanted him to do. 503 yards through the air, five touchdowns, and three receivers with over 120 yards receiving. No bones about it, this is the game everyone wanted to see, an instant classic and when it’s all said and done, this game will be the most entertaining game of the year.

Now, it’s a division game, which means anything anyone says about how this game is going to go, it won’t. And it’s against the Washington Redskins, which means nothing that either of these two teams has done all year to this point will matter. Against the Redskins, the Cowboys always derail slightly, and it’s always like this game is played in a bubble. The Redskins are coming off of a bye-week, and should be ultra-fresh and maybe the extra week off will be exactly what Robert Griffin needed to get healthy and get his head right. And I say that because, he has looked… just sort of off. He has looked shaky and almost, at times throwing the ball, unsure about his knee. The running of the ball isn’t a Robert Griffin problem, it’s a Redskins problem. Alfred Morris is a seriously dangerous running back, who did it all last year, ran it wide, between the tackles, and was scary out of the backfield catching the ball. But they haven’t been feeding him the ball as much, only 56 carries, and that just won’t do. Morris needs more carries, and it helps him, his team (because he has a 5.3 yard average), and his quarterback, who needs play-action to get him dangerous again.

The Cowboys need to build off what they did against Denver, and throw the ball with authority. I especially liked throwing the ball on third downs; I loved everything about what the offense did against Denver. On defense, improvements need to be made. Look, throw out the tape against Denver. Against San Diego, they didn’t get much pressure; they got burned out of the backfield, and made the quarterback look like a kid playing a video game. It starts with pressure, though. If the Cowboys can generate some pass rush, then maybe they can force Griffin to throw something that he’ll want back. But with Robert Griffin, it’s never just about throwing guys at Griffin; it’s got to be orchestrated and precise, like a bad guy’s diamond heist or a Japanese factory. Players have to know where and when to blitz Griffin.

Matchup of the Week: Redskins Left Tackle Trent Williams vs Cowboys Defensive End DeMarcus Ware Ware hasn’t had much success against Williams throughout their times playing each other, and Ware isn’t looking like the same player. I’m not sure if it’s the position change, but he just isn’t getting the same terrorizing pressure and for him to get the job done this week, he’s going to have to beat a player that has consistently gotten the best of him.

Prediction: Washington 21 – Dallas 31; This game just feels like weird things are approaching, like some kind of stupid call by a ref or a bad replay is going to occur. 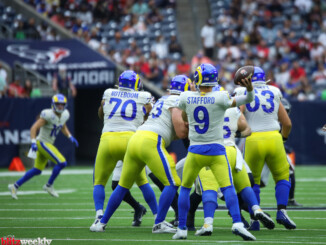