When I first saw the trailer for No Escape I thought it looked like Locked-up Abroad: The Movie, and if anything, would be a cautionary tale of why not to leave the good ‘ol USA.

It stars Lake Bell, Pierce Brosnan and Owen Wilson, who I didn’t think would make a good fit considering the last time I saw Wilson being action-y was in Behind Enemy Lines. No Escape centers on Jack (Wilson) and Annie (Bell) Dwyer, who with their two young daughters, relocate from Austin, Texas *because thats where all real Americans are from* to Southeast Asia for Jack’s new job, when the prime minister is assassinated and the government is overthrown. Chaos engulfs the city, with foreigners and anyone helping them, being executed on sight; leaving Jack to find refuge for his family and protect them at all costs.

The film cold opens with a long shot following a secret service type guy around while he does stuff like test if a drink is poisoned and walk far away to let his boss, the prime minister, get killed. The secret service guy returns to see the aftermath and is standing face-to-face with his bosses killers, either out of loyalty or knowing he would stand a chance against them, he takes his own life by slashing his throat. We don’t see the gore but a silhouette the bodyguard and red blood spray on white linen then BAM, the title card. The sequence is pretty cool and the title credit has an old school feel to it that fit the tone set by the intro.

Besides an almost rape scene, the rest of the film doesn’t feel as intense as the intro, with certain moments that you’re suppose to feel anxiety for the family, you end up just waiting for them to be saved instead of wondering if they will be saved. Yes, in films we have characters that we know won’t die but just because the audience knows this doesn’t mean you can’t convey a real sense of danger for the character. The sense of chaos was there, and the film achieved creating that environment but the intensity wasn’t always present. How the film decided what violence would be shown and which would be cut away from right before it happened seemed inconsistent. A clash between militia and police that should have felt like the beginning of the insanity instead came across like an angsty music video. Even when Jack kills a person for the 1st time, it isn’t all that memorable and it isn’t made entirely clear if this changed Jack or not. He brings it up when he had alone time to converse with Pierce’s character but thats it.

Character development for Jack feels kinda absent. There is a point brought up about american capitalism taking advantage of poorer countries and putting them in debt, in fact the company Jack works for is the culprit. But this point feels like a throw away scene considering Jack doesn’t question the morals of his employers after hearing this, nor does he seem to care all too much. I can forgive Jack not seeming to care when he learns this because he is too busy trying to find a safe haven from the advancing threat, but at the end of the movie there seems to be nothing he has learned from this, or any growth for that matter, over the course of events. He is provided with background and is believable as a loving father trying to do whats best for his family, but by the end of the movie he seems to be the same Jack we met at the beginning of the film, even after what he’s endured.

No Escape does have its pros though

The acting by almost everyone was great, the kids act like real kids, the family has chemistry and feels organic. Owen Wilson is a convincing dad, trying to survive and keep loved ones safe in an extreme situation. Pierce as Hammond is awesome and like nothing I’ve seem him do before.

The film did have its share of “OH SHIT” moments that were done well, upping the stakes every time we think the family have found safety. The scene where screaming and thrashing can be heard outside of the hotel door and we see through the peephole a guy with a machete covered in blood brings intensity back, even if just for a few moments, to the atmosphere.

The direction is really stylish throughout the film and the score and music really add to the energy of the film. Comedic moments are spread out through the film and they are genuinely funny, if you don’t laugh at Kenny Rogers you have no sense of humor overall, No Escape was better than I thought it would be and is worth checking out. 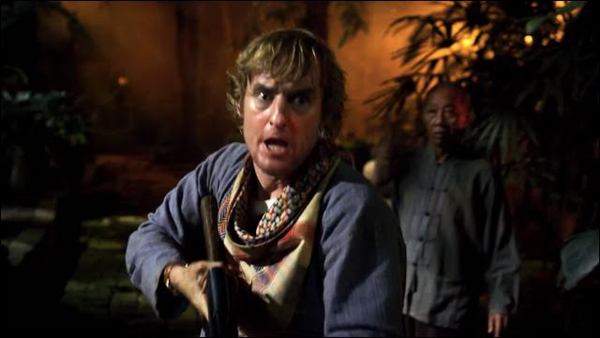