It’s what we’ve been waiting for, for two whole weeks. The big one. Manning vs. L.O.B. Seahawks vs. Broncos. The Super Bowl. It might be a bit chilly, a little snow may fall, but in the end who really cares? THIS IS SHOWTIME!
My article will show just how Denver can pull this game off, which I believe the sure can.
Keys to the game
For Denver to win this game, they obviously need to put more points on the board than Seattle does. If this star studded receiving core can beat the L.O.B at the line of scrimmage, Peyton will hit em’, and the Broncos will ride into the sunset. By all means, that task is much harder than it sounds. Seattle has by far the best D in the league.
Knowshawn Moreno also needs to get going in the Super Bowl. When he’s at his best he can get away from any defense in the game. Moreno had a huge year, but he has started to cool down as of late. He would love to flip the switch and get back on the right track. Knowshon also may be playing in his final game wearing the orange and navy, so he would love to impress the front office.
Denver’s defense also has to hold their own. Beast Mode and the Seahawks running game can be very effective, but I think Pot Roast and the rest of the D-Line can bottle Marshawn up. Russell Wilson has been pretty cold lately and now has to play on the worlds’ biggest stage. Can Russ pull it off? I’m just not sure. My bold prediction is that Champ Bailey makes a huge play in his first and possibly last Super Bowl.
Prediction
If Denver can get the run and pass game going, they will pull this one off, which I believe they will. My final score goes 27-13 to Denver, as the Seattle D crashes into the ground. 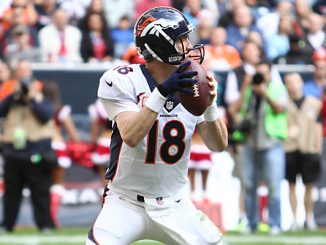