How did they get here?
The Aggies started off the season red hot with a victory at then ranked #9 South Carolina and climbed all the way to #6 in the nation before faltering down the stretch and finishing in sixth place in the SEC West division. The Mountaineers had some real quality wins and some very bad losses that resulted in them ending up in the 6th position in the Big 12.

Texas A&M
Roller coaster ride is the only way to describe the season for the Ags. A supposed star was born in Kenny “Trill” Hill as he led them to a 5-0 record to start out the year and was even the subject of early Heisman Trophy discussions. Then the SEC schedule happened. A&M got throttled by both schools from Mississippi and capped that off with the second worse loss in school history when they fell to Alabama 59-0 in Tuscaloosa. The maroon and white were forced to make a quarterback change and gave the ball to true freshman Kyle Allen who showed he could hang with the big boys, particularly when he led the team to a massive road upset of the #3 Auburn Tigers. A&M would eventually finish out the season with consecutive close losses at Kyle Field to Missouri and LSU marking the first time since 1970 that the Aggies failed to win a conference game at home. They’ve since fired defensive coordinator Mark Snyder, lost wide receivers coach David Beatty who took over the head coaching job at Kansas, yet are still looking to get their fourth straight bowl win which would be a first in school history.

West Virginia
Roller coaster ride is the only way to describe the season for the Mountaineers. They kicked it all off against Alabama who find themselves at #1 and in the College Football Playoff and only lost by 10. After a couple of wins they then lost to Oklahoma who was in the top 4 at the time. Then they were able to put together a four game winning streak with the biggest of all wins coming over Baylor, a blemish that would ultimately keep the Bears out of the playoffs. Their momentum was halted by a one point loss to TCU 31-30, and as everybody knows the Horned Frogs were bounced from the playoff picture by the committee on the final week of the selection process. They would then go on to lose their next two at the hands of the Texas Longhorns and Kansas State. West Virgina was able to get past Iowa St. in their final contest but will miss senior quarterback Clint Trickett and his 3,285 yards passing plus 18 touchdowns through the air. Trickett was forced to retire from football this week after sustaining five concussions in just a fourteen month span.  He will be replaced by sophomore Skyler Howard, who has looked sharp in limited playing time during Clint’s absence.

Prediction: There has been some light hearted back and forth trash talking over the last couple of weeks between West Virginia head coach Dana Holgorsen and Texas A&M offensive coordinator Jake Spavital who both worked together under Aggies head coach Kevin Sumlin at the University of Houston. Coach Spav even joked that A&M will know all of the Mountaineers’ signals and play calls. Even if that were true it wouldn’t matter as bad as the Aggie defense has been all season. Look for this one to be a wild shootout with West Virginia coming out on top 45-42.

Aggies Roll Mustangs at The Hilltop 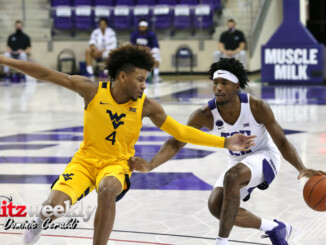