All is quiet inside NRG Stadium when the Houston Texans Cheerleaders arrive over five hours prior to the noon kickoff between the Texans and Baltimore Ravens. It is one of the most important contests of the season for both teams as the Ravens could clinch a spot in the postseason with a victory while the Texans with newly signed quarterback Case Keenum were fighting for their playoff lives that depended not only on their winning out, but multiple other factors with various other teams throughout the AFC falling in their favor.

The 33 ladies that comprise the Houston Texans Cheerleaders team have a call time of 7 a.m., although many of them wake up around 4:30 a.m. and arrive at the stadium far earlier to ensure they are prepared for the day that lies ahead. When the audition process took place back in April, a record 1,033 ladies were on hand with hopes of making the squad, so the 33 ladies who were selected for the team are obviously very talented. However, as each home game approaches, coach Alto Gary keeps them at the top of their game by not only practicing three nights a week, but also having them audition for the chance to be out on the field on Sunday.

After going through line practices and basically running through each of the day’s dances in the locker room, the ladies start getting their hair and make up ready before heading out to the field at 9 a.m. sharp for “sound check.” During sound check, they play each song that the cheerleaders will be dancing to throughout the day as their last warmup before the game kicks off. In the meantime, there is no rest for the cheerleaders as once sound check is completed, it is time for them to make their game day appearances consisting of autograph signings, taking pictures with fans and performing on the Budweiser Plaza.

“For our game day appearances, we get to mingle with the fans and visit with them and they get to see us up close and personal as opposed to when we are down on the field,” said second-year veteran Madison. “It’s a lot of fun and I would say that is one of my favorite parts of the whole game day experience.”

On this particular day, the cheerleaders went out for their appearances in their traditional uniforms, but went back to the locker room to change into their Santa outfits that were custom-designed by coach Gary specifically for this game. Gary took her favorite parts of each of the previous holiday uniforms and submitted it to the team’s designer for this season’s game. They are performing three routines — pre-game, third quarter break and two minute warning — with each of them themed around holiday music.

As the kickoff approaches, the cheerleaders walk out of the tunnel and form an intro-line out on the field for player introductions that includes fireworks and sizzling hot pyrotechnics to raise the level of intensity inside the stadium to an entirely new level. The cheerleaders remain out on the field for the national anthem, which was performed by four-time Grammy winning country singer-songwriter Lyle Lovett after the Texans and Ravens players arrived on the sidelines.

Following the pre-game action, the cheerleaders split into their four groups led by Madison, Amelia, Lesha and Liz and take their positions in the corners of the field in front of a capacity crowd of 71,771 fans. While the Texans franchise is still relatively young — their first game was a 19-10 win over the Dallas Cowboys on Sept. 8, 2002 — their fans are very knowledgeable during the game. The cheerleaders also take pride in keeping the massive stadium very quiet while the team is offense and helping ratchet up the decibels to rock-concert levels while J.J. Watt and the defense are out on the field.

“I am a huge sports fan. Big, big into sports, so my favorite part of game day is watching the game and being so close to the action,” said second-year veteran Caitlyn. “It is so surreal to be down on the field looking up at a huge crowd of over 70,000 fans and it gets so intense when J.J. Watt makes a big play and everyone is screaming MVP as loud as they can. It is so unbelievable and I get the chills all the time. I love every moment of game day.”

One of the driving forces behind the Texans cheerleaders popularity has been their domination in the social media front. A prime example of this occurred back in February when a Crosby High senior known as ‘Big Mike” asked Caitlyn if she would go to the prom with him if he could get 10,000 re-tweets. She agreed, he did, it went viral on the Yahoo! front page and the rest is history.

The cheerleaders are required to tweet at least once everyday on any number of things including where they are going on appearances to directly interacting with fans. Not so coincidentally, there are two NFL cheerleaders who have surpassed the 40,000 followers mark and they are both on the sidelines at NRG Stadium. As of press time, Caitlyn has 44,713 and Lesha has 43,722 followers.

Another sign of the Texans cheerleaders growing popularity came when shortly after auditions, they had their first destination calendar shoot in Puerto Rico. For four days in May, they did photo shoots on private beaches, private boats and had iguanas walking alongside them in the sand.

“It is my third year to be given the opportunity to be in the calendar,” said Delaney, a third-year veteran cheerleader. “The entire experience was amazing and this year we had our first calendar release party at the Houston Texans Grille. We revealed the cover and then the calendar girls in front of a huge crowd and it was the first chance for fans to buy them.”

In addition to those who were featured in the calendar, there was one Texans cheerleader who stood out for a different reason all together. The 33 ladies voted and gave third-year veteran Liz the honor of representing the team in this year’s Pro Bowl, which will be played at the University of Phoenix Stadium on Jan. 25, 2015, the week before Super Bowl XLIX.

“I am so blessed to be a part of this team,” said Liz, who found out she had been voted in after a week night practice at the Methodist Training Center, better known as the bubble across the street from NRG Stadium. “While I basically blacked out after the announcement, my teammates told me that our coach said that 97 percent had voted for me. I had tears of joy and I am very honored.”

The Houston Texans Cheerleaders and their fans would have a lot to cheer about on this day as the Texans got out to a 16-0 halftime lead over the heavily favored Ravens. Behind Pro Bowl running back Arian Foster’s 96 yards on the ground and a touchdown pass and the defense led by Pro Bowl defensive end Watt, the Texans would keep their playoff hopes alive, winning 25-13.

As the fans poured out of the stadium, the cheerleaders were set up at tables at all four exit gates selling and autographing copies of their 16-month calendar that benefits the Houston Texans Foundation. Caitlyn, Lesha and Sarah F. were stationed in the northwest corner and had long lines for close to an hour of fans purchasing the calendars and getting their pictures taken with the cheerleaders.

While it may have seemed impossible to make the hoard of Texans fans any more ecstatic after the big victory, the cheerleaders easily accomplished that goal by taking the extra step to make sure all of the fans had their pictures and autographs before calling it a night. And by calling it a night, I mean retreating to the locker room and getting on social media to celebrate the win with their fans.

For further information on the Houston Texans Cheerleaders, visit houstontexans.com/cheerleaders. 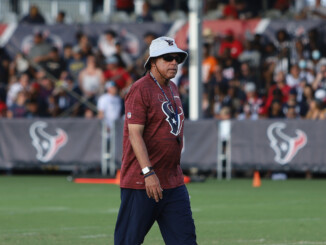 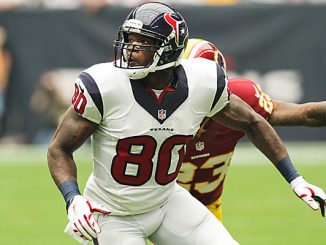