On the good side, the Stars are playing much better hockey. On the bad side, they aren’t always winning.

Dallas lost a 3-2 overtime game to Minnesota on Thursday, their second defeat in their past two OT contests, but also put a tremendous playoff-like effort on the ice for the second consecutive game. After beating Tampa Bay on Tuesday, the Stars had a 36-27 edge in shots on goal, a 61-54 advantage in shot attempts and a significant margin in quality scoring chances. Fact is, Dallas could’ve won the game in regulation if not for the outstanding work of Minnesota goalie Marc-Andre Fleury.

So that’s a positive.

“That’s playoff hockey,” Stars coach Rick Bowness said. “We outplayed them. The difference in the game was Fleury. We outplayed them in all three periods, but we just didn’t put enough pucks behind him. We hit goalposts and had open nets we didn’t get the puck in, but that’s hockey. I’m very happy with the way we played.”

The points put Dallas at 42-27-5 (89 points). The Stars are tied with Nashville in the standings, but lose the first tiebreaker, which is regulation wins (the Predators have a 34-28 advantage). The point puts Dallas two points ahead of Vegas with one game in hand, and one point ahead of Los Angeles with two games in hand.

It means the Stars are still clearly in control of their own destiny. Getting three points against two great teams in Tampa Bay and Minnesota sets the Stars up well, but they have to take control of business against teams like San Jose (at home Saturday) and Vancouver (on the road Monday).

“We just beat Tampa, we just tied Minnesota and lost in overtime but that’s two of the

league,” Bowness said. “If we keep playing like that, things will be okay.”

Dallas started very strong on Thursday and play hard throughout. Minnesota took a 1-0 and 2-1 lead, but Dallas fought back on the strength of two Jason Robertson goals. The second-year forward was able to battle Fleury on a net-front power-play battle for the first, and then powered a one-timer from distance through Fleury for the second.

It was an example of both skill and second effort that was needed to beat the veteran netminder.

“You’ve just got to keep going at him and he made some great saves,” Bowness said. “He’s a Stanley Cup Champion, Vezina Trophy [winner] and he’s a hall-of-famer so good for him, he had a great night.”

Robertson said he and his teammates had to keep the intensity high.

“They have a fantastic goalie,” he said. “He won the Vezina last year. We had to get a lot of shots, shot volume, a lot of grade-As. We’re trying to score, and we just couldn’t get the third one.”

And, really, they have to expect the same for the remaining eight games. Even if they’re not always playing teams that’ll be in the playoffs, they seem to play better themselves when that attitude exists on the ice. Tampa Bay and Minnesota are both battling for home ice in the first round, and that lifted the game of the Stars.

“I think that’s two playoff-type games that in a regular season that’s the closest you’re going to get, so I think we’ve rose to the occasion when we’ve met these games and that’s great,” said forward Tyler Seguin. “I don’t think — as a team or as individuals — we can really just flip a switch going into playoffs. You’ve got to be playing playoff hockey going in there. That’s why sometimes you see the lesser seeds come out and have upsets because they’re playing these games, fighting for our lives, so that’s positive.”

Seguin finished with nine shots on goal and went 10-5 in the faceoff circle. He’s creating chances and is hoping he and his linemates can find a way to cash in. But while that didn’t happen on Thursday, the effort can’t waiver. A team that has struggled to find consistency needs it more than ever right now.

“There’s no time to sit back and reflect, we’ve got to get ready for Saturday,” Bowness said. “This puts more focus on the Saturday game with losing the extra point tonight. If we play like we played tonight, we’ll be very happy with the outcome on Saturday.” 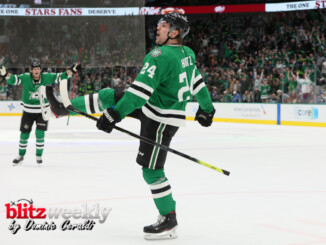