Having just completed watching a weekend of British Open Golf there were a couple of items of interest which caught my fancy.

For one, the weather or lack thereof. For another the level of distances so many of the golfers drives went.

Seemed each time your eventual champion Rory McIlroy proceeded to tee off from a par 5 location he was on the green in two and making eagles like it was child’s play.

What these eyes witnessed on holes 16 and 18 on Saturday was enough to convince me no one was going catch the Irishman in his quest for a Grand Slam.

Now three quarters of the way there at age 25. Equal kudos to be given to Rickey Fowler and Sergio Garcia for making Rory work for the 143rd playing for the Claret Jug.

This got me to thinking. How rare is it for a team or a player to go wire to wire in a season/tournament? Time for a little research.

Prior to what Mr. McIlroy did this weekend 2014 it has only happened five other times in British Open play. One must go back to 1973 when Tom Weiskopf was the last to do it at Troon Golf Club.

In baseball it’s happened only five times beginning with the 1927 Yankees. The Dodgers of Brooklyn in 1955 also had that distinction. Who can forget that magical summer of 1984 in the Motor City and the Tigers? Ah yes, the Cincinnati Reds of 1990 and the Chicago White Sox in 2005 also went wire to wire.

In essence it’s a rarity.

How about the commonality of a wire to wire season in college football? Survey says: Not too often! Before all this BCS hoopla most fans will recite the success of the Seminoles of Florida State. They weren’t  the first however. Go back to 1943 with Army, 1945 Notre Dame, even the Trojans of USC in 1972.

Wire to wire. Again kind of a rarity!

Once again, wire to wire rare in almost a century of play.

This tells me I am to enjoy the history that was made across the water this past weekend at the British Open with Rory McIlroy. Kudos also to his Dad and friends who made a wager ten years ago that Rory would win said title before turning 25. 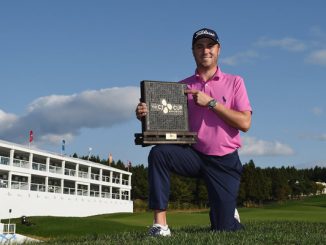