As the Dallas Stars begin the regular season Thursday night against the Chicago Blackhawks, I had a chance to catch up with starting goaltender Kari Lehtonen after practice to see where he is on his health and what he is looking forward to the most as the season gets under way.

How are you feeling right now?
Pretty good. I’m exciting to get things going. There’s been a lot of waiting for the season to start and we’re almost there.

Do you feel you are a 100% healthy now after getting a little dinged up towards the end of preseason?
Yeah, I feel normal. It’s just getting back to playing games. You can only do so much in practice and games are a lot different so I’m excited to get the game feel back.

After a tough ending in the playoffs last season, are you guys using that as motivation to have an even better season?
Well, you always try to improve and get further. It doesn’t really matter how the last season ended. Everybody was mad about it, but we have to forget that and be prepared to play well from the first game on and not look far ahead.

What are your thoughts on backup goalie Anders Lindback?
He’s really good. He’s a great guy and goalie. He’s here to help the team and I’m sure he’ll get plenty of chances to go out there and make us a better team. He’s really big and intimidating when he’s out there. He’s fun to watch in practice. I try to take a little from his game to mine. He’s really calm and uses his size so I would like to do that more.

What is the biggest thing you are looking forward to going into the season?
In the first 10-15 games, we’re looking to get things rolling and establish how the team plays in front of me and how I play. It’s learning from each other and when you get that figured out, you focus on improving your game and the whole team game. When the season goes on, teams that are able to get better during the year are usually the ones that do well in the playoffs and go far.

Good luck on the season.
Thanks.

Reasons To Be Cheerful 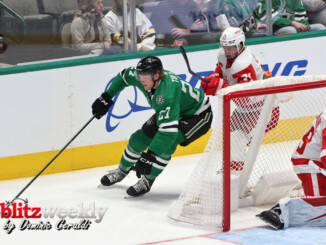