Houston Cougars (7-5, 5-3 in AAC)
Despite losing two of their first three games, Houston beat Memphis, Tulsa, Temple, and rocked SMU like a hurricane. The Cougar attack is very balanced, not overly dominate at the passing game (70th in FBS) or ground game (49th in FBS), but only allowing the 12th fewest points per game at 19.5.

Pittsburgh Panthers (6-6, 4-4 in ACC)
The Panthers lost a huge chunk of games in the middle of their season, losing six games in seven weeks, including four ACC games. But the Panthers won their final two ACC games, including at Miami to finish bowl eligible. The Panthers are severely ground heavy, 15th in FBS at rushing versus 105th in FBS in passing. Their new head coach, Pat Narduzzi, will be just up the road at AT&T Stadium, coaching Michigan State’s defense.

RB Kenneth Farrow – Farrow is bad for your health, five foot ten, 218 pounds of force. Farrow didn’t breach the 1000 yard mark this season, but was only 32 yards short. Farrow is a shark, he knows that the blood is in the endzone, and has 12 touchdowns on the ground this season.

SS Adrian McDonald – When I was prepping for the Houston-SMU, I saw the stats of McDonald, guy rolling in with a three game interception streak, and caused eight turnovers on the season. McDonald is a play-maker on defense.

LB Efrem Oliphant – A middle linebacker with 130 tackles, what more could a team ask for? Add a pair of forced fumbles, a pair of interceptions, three and a half sacks, and eight and a half tackles for loss, and Pitt has got to account for Oliphant.

RB James Conner – If Farrow is bad for Pitt’s defense, the quick, speedy, lighter defense of Houston isn’t ready for Conner. Six foot two, 250 pounds. That’s pro-material. But is he just a ram? 277 attempts for only 1675 net yards, for a six yards per attempt average for the season. Endzone is his home, with 24 rushing touchdowns. Houston is going to have to be on it to slow down Conner.

WR Tyler Boyd – Pitt doesn’t always throw the ball, but when they do, the ball goes to Tyler Boyd. Despite losses in three of the four games, Boyd’s games against Georgia Tech, Duke, North Carolina, and Syracuse, were games with at least five catches and 126 yards. At six foot two, 190 pounds, Boyd is a match for any of Houston’s top corners.

Prediction: Pittsburgh 30 – Houston 24 James Conner is going to truck through the Cougars’ defense. 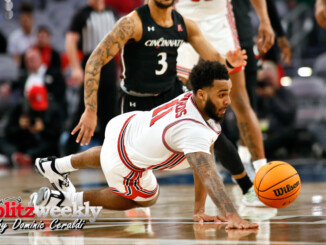