Last week the Mustangs went to Tulsa and took care of business, beating the Golden Hurricanes by 11 points; 45-34. The Mustangs are sitting at 4-4 and need 2 more wins to become bowl eligible and need a victory at home to record their 5th win. Let’s take a look at this week’s Mustangs home game against Houston.

American Athletic Conference
Only two teams sit between Houston and SMU in the standings. A win at home this week would allow the Mustangs to move up 2 spots in the American Athletic Conference. Both teams are pretty close in points scored and allowed this season. The SMU offense averages 35.6 points per game while the defense is giving up 30.0 a game. Houston’s offense is scoring 33.3 points per game while their defense is giving up 31.1 points per contest.

Houston Cougars
The Cougars are 4 and 1 in their last 5 games. The Cougars has quality wins over USF, Navy, Memphis and Rice. Quarterback Clayton Tune leads this team with 2208 passing with 21 touchdowns and 4 interceptions. Keep an eye on running back Brandon Campbell, he’s only a freshman but he’s learning and growing with every carry. He’s averaging 4.7 yards per carry. Wide out Nathaniel Dell has 10 touchdowns on 60 receptions. He is a handful. The x-factor will be the Houston defense this week.

SMU Mustangs
SMU has played a lot better over the past few weeks. Keep in mind that they are 1-3 in that time span, but the defense has learned to play hard and smart in that time span. I was surprised to see how well they played on the road against Tulsa last week. This week, they will need to create turnovers against Houston. The Mustang defense will need to first stop the run and then shutdown Nathaniel Dell on the outside. He’s dangerous after catching passes in the flat. He makes things happen in the open field, so SMU will need to double cover him.

Prediction
ESPN has the Mustangs with a 62.3% chance of winning at home this week. If the Cougars get off to a fast start, SMU will be trouble. I’m taking the Mustangs by 7! 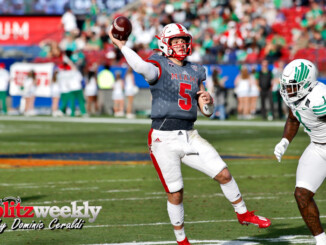 Is There Life for Vince Young Beyond the Gridiron?