The Indiana Pacers got 24 points and six boards from Paul George, David West contributed 18 points and eight boards to the effort, and the Pacers fended off the Brooklyn Nets by the score of 96-91. Then they beat the Grizzlies on Monday night to remain unbeaten.

You will find no argument here. Jumping out to the best start in franchise history is no small feat. They might even hit that Lance Stephenson prediction of 10-0. As a matter of fact, I think that these Indiana Pacers are legitimate NBA Championship contenders, if not the favorites. The Indiana Pacers have what most teams want. No not Paul George or Roy Hibbert, (although I’m pretty sure there are teams that want them too), but what I’m talking about are the three C’s. Chemistry, consistency, and confidence.

The kind of chemistry that this team plays with is very refreshing. Besides leading the NBA in basically every measurable defensive stat (field goal percentage allowed, points per game, etc.), offensively they know where each other wants the ball. The big man in the middle, Roy Hibbert, is that anchor on the inside that makes this defense a force to be reckoned with. Not to mention the fact that he can get you those points in the paint, making him the perfect catalyst to operate the inside-out game that is very effective in getting scorers like Paul George and Lance Stephenson open looks on the perimeter.

They trust each other out there on the court. They believe that the weak side defense will be there to help. They believe that when they rotate to pick their teammates’ man, that someone will rotate to get their man. They trust their coach to make the right calls about game management and personnel use. Trust is something that is not easy to develop, and when it is developed, it can be even harder to maintain. That is not an issue with this team.

The last C may be the most important of all. Confidence is extremely important when talking about chasing something as difficult as the top seed in the eastern conference, especially this early in the season.

“We believe in this locker room that we can get the No. 1 seed and we started the year with that attitude,” said Pacers forward David West after registering 18 points and eight rebounds. “The fact that Game 7 of the conference finals wasn’t in our home building we felt was the difference in a trip to the Finals, and we’re going to do everything in our power to get a Game 7 in our building. And we have to start from the beginning of the season.”

To put it bluntly, this team reeks of confidence. If their confidence was a guy wearing  cologne, he would be the guy whose scent cloud would linger 30 minutes after he had left. There is nothing wrong with an exorbitant amount of confidence. In today’s NBA that is the only way to get you where you want to be, NBA Champions.

It all starts with Paul George, the leader of this scrappy group of guys. George has really grown to accept his role as the leader and offensive main offensive threat of this team. And its about time because if this team wants to get those rings, then Paul George will have to not only perform at that all-star level that he performed at last year, but will have to exceed that level. In short, he will have to put up MVP like numbers. So far in the early season, that is precisely what he is doing. Seven games and here is what his averages look like: 25 points, 8 rebounds, 4 assists and just under 2 steals a night while shooting 47 percent from the field and 43 percent from 3-point range.

“I feel like I’m coming into my own, I feel confident out there,” George said. “I want to be separated from the offensive guys, the scorers, I want to be considered an elite player on both ends.” 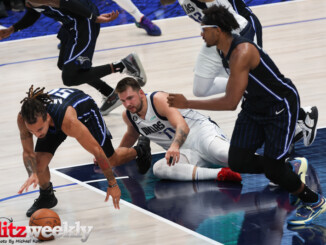