Thankfully one streak ended in Ames, Iowa. Hopefully a new one will commence if the Horned Frogs are to make it to a bowl game with wins over the next two weeks.

The Cyclones for the fourth game in a row trailed after 30 minutes and would falter late for their 8th straight loss courtesy of the legs of one Trevone Boykin.

One down, and two to go.

Saturday on the road TCU (4-6, 2-5 Big 12) enjoyed a rare 14-7 halftime lead. That lead would evaporate to begin the 3rd period when Devondrick Nealy would slither past some would be tacklers for a 98-yard touchdown. Knotted up at 14 Iowa State tried their darnedest to play spoiler to the Horned Frogs. It was not to be, and not for lack of trying.

Cole Netten laced up a 35-yard field goal to give the Cyclones a 17-14 lead. The first lead Iowa State had in a month.

Casey Pachall was 20 for 36 in the air for 245 yards. Two interceptions would take TCU out of being able to get and extend a lead. One of his picks nearly cost TCU the game. Leave it Coach Patterson to remind the team of the meaning of ‘urgency’.

Trevone Boykin got the scoring started at 5:09 of the first period on an 18-yard run. This completed a three play 23 yard drive. Boykin would only get five touches on the day. Three touches were good for touchdowns. A career best and nine for the season for Trevone.

SB Richardson would tie things up at 7 at 12:44 with a 15-yard run scamper. Eight plays 59 yards in 2 minutes and twenty seconds.

Trevone Boykin would get his second touchdown at 9:51 of the first half on a three yard burst. This completed a nice drive of 8 plays and 69 yards in two minutes and 47 seconds.

Aaron Wimberly was one of your Cyclone leader with 36 yards on 18 carries.

Paul Dawson and Chris Hackett compiled eight and nine sacks defensively as TCU now prepares for a tough test in Manhattan, Kansas later this week with Bill Snyder and the K-State Wildcats. Two more wins for TCU and the bowl bid remains in place. Lets see what happens.

Saturday afternoon was “Trevone Time” in Ames, Iowa. An exciting finish and I’m sure something Gary Patterson will address in his weekly presser before the trip north. 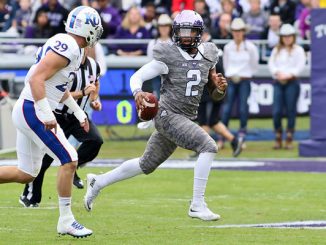 The No Look Way To Lose!