Though the tall and relatively spry German’s best days are behind him, his list of accomplishments is just as tall as he is. Dirk Nowitzki is a National Basketball Association champion, league most valuable player, Finals MVP, 11-time All-Star, Dallas icon and has recently added dad to his resume. Heading into the 2013-14 season we have to ask the question; does he have anything left to prove?

It’s hard to believe the Dallas Mavericks hoisted up the Larry O’Brien trophy only two seasons ago. The roster has since been blown up after the lockout putting the Mavericks in somewhat of a rebuilding/reloading roster purgatory with a 35-year-old Nowitzki as the offensive centerpiece. When asked how many more good years he’s got left he responded that 2-3 years is a likely estimate.

What Dirk wants to avoid again is having any surgery during the season. His knee surgery at the start of the 2012-13 season knocked nearly 30 games off his season and pretty much derailed the Mavs chances of making the playoffs.

If you were 100 percent honest with yourself as a cold-blooded Mavs general manager, dealing Dirk for assets or a high draft pick would be the right move for a team rebuilding. We saw the happen this summer when Boston traded away Kevin Garnett and legendary Celtic Paul Pierce.

Nothing is ever sacred in pro basketball, or is it? I’d venture to say that a majority of Mavericks fans (owner Mark Cuban included) want to see Dirk retire as a Maverick in his home jersey. He means that much to the city and to the fans of this town. Basketball stars like Dirk come around only once in a lifetime (if that) and that magical run in 2011 will be remembered as the pinnacle moment that legitimized Dallas as a true basketball city.

It was one of the area’s biggest sports moments and didn’t involve Jerry Jones or the star. It was about Nowitzki putting the team on his back like he’d had done timeless times and finally breaking through against the evil championship factory, the Miami Heat. It was about Cuban finally proving all the doubters wrong that you could win an NBA title with a 7-foot shooting big man. There were so many positive things to take away from that experience and all the while Dirk remained one of the most humble human beings on the planet.

But given his age, the Mavs can’t expect Dirk ever to be that Dirk again. He averaged 17.3 points and 6.8 rebounds last season, the worst figures since he was a rookie. Cuban has been trying to find Dirk real help for one last great year but it’s tough sledding in the NBA. Dirk does not want to be traded, but this no-playoff stuff is not something he wants to experience again. “I belong to the city of Dallas; that’s the bottom line,” he said. “I also want to play for a winner.”

Nowitzki is near the end of his career but could make a considerable impact in the playoffs on a contending team as a closer, sort of what Brooklyn will likely do with Pierce. However, it appears he does not see a scenario where that happens. During a taped interview that aired during the Mavericks’ 99-93 loss to the Los Angeles Clippers last January, Nowitzki told ESPN cameras that he’d like to end his career in Dallas.

“Ultimately, my goal was always to finish my career in Dallas,” Nowitzki said. “The only way I was going to leave was if we wouldn’t have won a championship and I would have been chasing my last two years or whatever like (Gary) Payton and (Karl) Malone did when they went to the Lakers and joined Kobe and Shaq. Something like that, maybe I could have seenmyself doing at the end. But since I got that ring now, I think I’m going to finish my career in Dallas.”

Dirk has nothing left to prove to the league, Dallas fans, or anyone else for that matter. He’s a Hall of Famer in basketball, as a person and as an international ambassador for the NBA. However, knowing what we know about Dirk, we know he’ll be the last to leave the gym. We know he’s going to give everything he’s got in these final few seasons because he’s a Hall of Famer, and that’s what they do.

Looking forward
While Dirk has nothing left to prove, the Mavericks signed someone this offseason that does and carries it like a brawny two by four on his shoulders. He’s not a big fish like CP3 or Dwight Howard but they did snag a wild card in Monta Ellis. Advanced stats will tell you he’s a volume shooter who takes bad shots and by multiple accounts has awful defensive fundamentals. However, his irrational confidence reminds us that he truly is capable of being as good as he thinks he is. I do not need to remind Mavs fans of his role in the “We Believe” Warriors team where he sliced and diced our interior defense with blazing speed which hasn’t diminished. He also has the luxury of playing with Dirk who creates space by his mere presence. He’s got room to move no matter what play is happening with that duo. Monta and Dirk will attempt to create a high-flying version of the two-man game he and Terry were famous for. The Monta Ellis the Mavs need is the penetrating guard who infiltrates the paint with his speed and distributes the basketball to the outside shooters. The Monta Ellis to Wayne Ellington should be exciting development this year. We are all just praying that is whatever he means when he says “Monta Ball.” Monta is a player that scored 72 points in a high school game. He can flat out score and anybody that can help do that takes added pressure off of Nowitzki.

The biggest cause for concern for this team is at the center position. Samuel Dalembert’s minutes might be a big issue. A lot of speed and length will be needed to keep the Mavericks paint clean this season. He’s been a stellar defensive player at other places but he might need extra games off to recover during a full NBA schedule. They’ll especially need a reliable back-up center in case the already injured Brendan Wright gets banged up again. If Dalembert plays work horse minutes he’ll be gassed by the playoffs. We will need a fresh Dalembert if we are doing anything in the postseason with Russell Westbrook or Tony Parker lurking about. DeJuan Blair is exactly what we needed at the forward position. He’ll be the guy in the paint banging down low so Dalembert won’t have to every night.

The point guard play was finally addressed this offseason when Jose Calderon arrived.  Remember when you hear like a really killer 70s song in the car? Calderon moves the ball and can shoot a lot like Steve Nash. Jose and Dirk should be able to create a David Gilmour version of the Pink Floyd Nash/Nowitzki reunion tour that totally should have happened. Dirk bangs down some easy shots in transition and he’s sitting on bench a few extra minutes. Conservation of minutes for a few of the elder statesmen in the Dallas bigs rotation should be a major focus for Rick Carlisle and his coaching staff. Look for extra minutes for DeJuan Blair and Jae Crowder to go after some boards this year.

This is a very interesting squad this season, one that could top out as a top-10 offense but we all know that one thing is for certain, “Monta ball” will be interesting to watch. 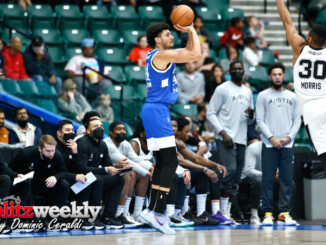