When the Houston Texans (2-1) welcome the Buffalo Bills (2-1) to NRG Stadium, fans will be treated to a battle of two first place teams that are both coming off their first loss of the season.

Houston began the season with wins over the Redskins and Raiders before falling on the road last week to the New York Giants. The previously winless Giants backed up their victory over the Texans with a 45-14 destruction of Washington on the CBS/NFL Network Thursday Night Football game of the week. Buffalo’s two wins to get the  year started came over the Bears and Dolphins prior to a 22-10 defeat at the hands of the San Diego Chargers.

The Texans played last week without leading rusher Arian Foster while their defense gave up 176 yards rushing to Rashad Jennings. It was a career high for Jennings, whose previous high was 150 yards vs. Houston last season when he was playing for the Raiders. As of press time, Foster was still having problems with his hamstring and was listed as questionable and will be a game time decision for the second consecutive week.

With Foster out, the Texans turned to the passing game led by former Bills quarterback Ryan Fitzpatrick. Fitzpatrick, who the Bills handed a six-year, $59 million contract extension back in 2011 when they thought he was the signal caller of the future, was 20 of 34 for 289 yards with a touchdown and three interceptions in the loss to New York. He will have to be much improved against the Bills and the team must get off to a much better than when they were outgained 262-83 in the first half by the Giants and do not forget that Fitzpatrick will be dealing with former Texans defensive end Mario Williams this week. Williams, the former No.1 overall pick of the Texans in 2006, is one of three Pro Bowlers on the Bills defensive line.

INJURY REPORT
Running back Arian Foster and punter Shane Lechler are questionable while linebacker Jadeveon Clowney is out for Houston.

On the Bills side, wide receiver Marcus Easley and linebacker Randell Johnson are out and running back C.J. Spiller, quarterback E.J. Manuel and wide receiver Sammy Watkins are probable.

PREDICTION
The Texans began last season 2-0 before losing 14 straight to finish the season. Look for the Texans to bounce back from last week’s loss and win a close contest, 17-14. 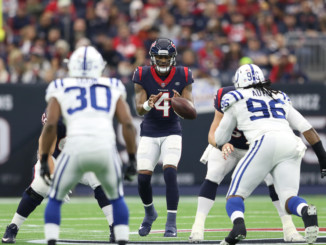