It’s that time of the year that Arkansas Razorback fans look forward to every year, it’s football season!!!

The Razorbacks will look to capitalize off of last season’s bowl win over Texas in which they dismantled the Longhorns. They also have great chance of accomplishing their goal of winning the tough SEC West. The Razorbacks lost Darius Philon, Martrell Spaight, Trey Flowers, and Tevin Mitchel on defense, but they have capable backups in DeMarcus Hodge, Tevin Beanum, Jared Collins, and Brooks Ellis who will fill in well. The Razorbacks also welcomed back running back Jonathan Williams who decided to forgo the 2015 draft and return for his senior season.

The offensive personnel has stayed the same although the offense will have a new scheme. The Razorbacks have a great if not one of the best running back duos in Jonathan Williams and Alex Collins. They also have another running back capable of carrying the load as well in Kody Walker. Walker had been injured and didn’t play much in the regular season last year and was recently granted a sixth year of eligibility. In the spring game, he rushed 26 times for 174 yards and three touchdowns. He showed that he is healthy and should get more touches and time on the field as a result. Another player, receiver Keon Hatcher is ready for a breakout season after leading the team with 43 receptions for 543 yards and six touchdowns last year. Also worth noting is that quarterback Brandon Allen was named to the Manning Award watch list and both Jonathan Williams and Collins were named to the Doak Walker Award watch list.

The offensive line has been the reason Arkansas has had success running the football. It has also been a big reason why quarterback Brandon Allen was only sacked only 30 times per 1,137 pass attempts and a 37.9 percent passes to sack ratio last year which was the fewest allowed by any offensive line last season. Having an average height of 6’4” and weight of 321.1 pounds will definitely help you run the football. With players such as 6’10” Dan Skipper,  6’5”Sebastian Tretola, and  6″5″ Denver Kirkland on the line, that leaves gaping holes for Jonathan Williams, Alex Collins and Kody Walker to run through.

The Razorbacks were a few plays away from winning 10 games last year. The only problem was that they couldn’t finish games. That was one growing pain that they had to overcome and they eventually did. And boy did they start playing well when they learned to finish games. They beat LSU, routed Ole Miss, and as mentioned earlier; dismantled Texas in the Texas Bowl.

My prediction is that the Razorbacks will go 10-2 and take the SEC West. It’s going to be a dog fight, but I think they have learned and grown from last season and can get the job done. 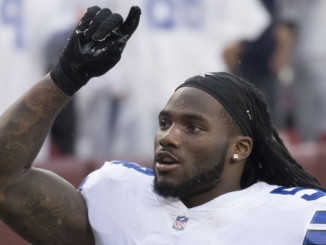