After an embarrassing defensive effort against Phoenix on Friday, the Dallas Mavericks behind their up and down defense defeated the Milwaukee Bucks 125-102.

“You got to respond the right way, especially after a home loss,” Mavs forward Dirk Nowitzki said. “We just weren’t good enough the other night. I liked the defensive energy we had today.”

The Mavericks built a 13-point lead with a 12-0 run in the first quarter and didn’t trail again in their second victory in five days over the Bucks.

They were led by Chandler Parsons who had one of his best games in a Mavs jersey by going 11 of 14 from the field for 28 points.

Parsons had seven points in that decisive run and nine in the opening period.

Dallas made 49 of 84 field goal attempts (58 percent) and seemed to beat Milwaukee to the punch all night long.

“When you don’t put any energy and effort into it, guys are going to get wide-open shots and knock them down,” Bucks coach Jason Kidd said. “They did that.”

The Bucks pulled within six four times in the second quarter, but Dallas scored the last four points of the first half to build a 59-46 lead.

The guy they call the “Greek Freak”, Giannis Antetokokounmpo – sliced through the lane and threw down a nasty one-handed dunk midway through the third quarter that was part of a 16-2 Milwaukee run that got them within 71-65.

Then Dallas would go on a game ending run by outscoring Milwaukee 17-4 over the last five and a half minutes of the quarter to lead 90-71 after three.

“We’re a veteran team and understand there are going to be runs in this league,” Mavs guard Monta Ellis said.

Dallas didn’t rely on Ellis who beat the Bucks on buzzer just five days ago to be the heavy-duty scorer he has been in averaging 28.4 points over the previous five games.

With the win Dallas is 9-1 on “Seats for Soldiers” Night in which season ticket holders give up their front-row seats to military personnel. 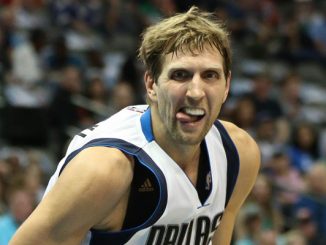