The game is named after the Dallas Cowboys Owner, President and General Manager and a 2017 Pro Football Hall of Fame Enshrinee.

The inaugural matchup will feature a pair of Top-5 Texas High School Football Class 5A Division I ranked teams in Denton Ryan (#1) and Longview (#5) and will take place on Saturday, Aug. 28 at 2:00 p.m. at Ford Center at The Star in Frisco, TX.

Ford Center at The Star will continue the tradition of hosting local Texas high school football contests, which has done so since opening its doors in 2016.

Denton Ryan is under the guidance of Head Coach Dave Henigan who in 2020 led his team to an undefeated 15-0 season and the 2020 Class 5A Division 1 State Championship.

Tickets are on sale now at SeatGeek.com starting at $12.50.

Fans can find tickets directly at the link here: https://seatgeek.com/jerry-jones-classic-presented-by-whataburger-longview-v-denton-ryan-tickets/football/2021-08-28-2-pm/5443837.

“It’s a great honor to have these two very proud and successful Texas high school football programs compete at Ford Center at The Star in Frisco to open the football season,” said Dallas Cowboys Owner, President and General Manager Jerry Jones. “High school football is the bloodline of our sport, and we appreciate the opportunity to host high school games of this magnitude here in Frisco. The tradition and spirit of high school football is alive and well in the State of Texas, and the Cowboys are thrilled to be a part of it.”

“Whataburger is proud to support high school football by partnering with the Dallas Cowboys for the first annual Jerry Jones Classic,” said Rich Scheffler, Chief Marketing Officer of Whataburger. “Helping to provide positive opportunities for student athletes and encouraging them to succeed, both on the field and in the classroom, is one of the key ways we give back to the communities we serve.”

Prior to the kickoff of this inaugural game, the Dallas Cowboys will be hosting their final Training Camp open practice where fans can watch the team prepare for their last preseason game against the Jacksonville Jaguars.

Practice will run from 10:15-11:15 AM and doors will open at 9:45 AM. Fans can enjoy entertainment on the Tostitos Championship Plaza prior to practice.

Additional details for Training Camp can be found at the following link: dallascowboys.com/trainingcamp. 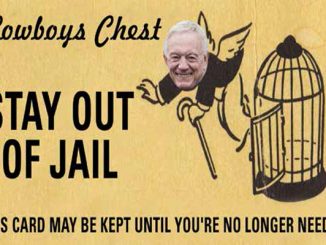 How The Cowboys Are Killing Their Fanbase: An Unbiased Tale