For a team that came into the season with higher expectations, the Dallas Stars are not playing like the improved team that was assembled in the offseason. They have lost four in a row and have appeared to have forgotten who they are as a team. It is still early in the season, but you cannot afford to fall too far behind in the difficult Central Division and Western Conference. Last Tuesday night, the St. Louis Blues were in town and the Stars had no answer for Blues forward Vladimir Tarasenko. He scored a hat trick including the winning goal in overtime as the Blues won, 4-3. One bright spot in the game for the Stars was defenseman Jamie Oleksiak who scored his first career goal in the first period and he talked about that after the game. “It is always nice to get that first one,” Oleksiak said. “It would be a lot better if we had gotten the win but overall I’m glad to that first one out of the way. Good pass by Seguin there, good setup by Benn and then I got a couple of bounces there and it went in,” as he continued.

The Stars had a couple of days off before the Anaheim Ducks would make a return visit to the AAC on Halloween night for the first time since eliminating the Stars in last year’s playoff series. You would think the Stars would come out aggressive and looking to avenge last year’s playoff series loss, but that did not happen. If fact, they looked lifeless for most of the game. Thankfully, Stars forward Antoine Roussel was able to tie the game at one a piece in the third period to get the game into overtime. But once again, the Stars would fall short as Ducks forward Nate Thompson would tip in a shot from villain Corey Perry as the Ducks won, 2-1. After the game, Stars captain Jamie Benn was not short of words to describe his team’s performance. “I don’t think we worked tonight very well as a team,” Benn said. “I thought the Eakin line played pretty good in the third there and found a way to get one point, but it’s definitely not Dallas Stars hockey. It’s pretty much embarrassing,” as he continued.

Interesting that Benn would bring up that they have not been playing Dallas Stars hockey as of late because it is true as I mentioned this briefly earlier. This team’s philosophy is to push the tempo with their skill and speed. They have not been doing this recently and it is starting to reflect on their win/loss record. Another disturbing fact is the Stars only have one win at home with four overtime/shootout losses. That is not good despite the fact they are getting at least a point out of these losses. If you want to contend in this conference, you have to start winning at home.

Fortunately, the Stars did not have to play another home game the next night as they traveled to St. Paul, Minnesota to take on the Minnesota Wild. The Wild have yet to lose at home so far this season and they continued that theme as they rolled past the Stars, 4-1. The Wild went into the game not having scored a goal on the power play until they scored two against the Stars. Meanwhile, the Stars had a 5 on 3 power play opportunity, but could not score. Stars head coach Lindy Ruff credited this and the team’s performance to a lack of energy. “There’s energy missing in our game, it’s as simple as that,” Ruff said according to dallasnews.com. “We’re getting beat to pucks, we’re not winning enough small battles. The energy level of our team isn’t good enough to win games, it’s as simple as that,” as he continued.

The Stars have a lot of problems right now. Their defense is not very good at the moment. The special teams are struggling and they do not seem to be playing with much passion. Again, it is early in the season but this trend cannot continue or they will find themselves down the basement in the conference. First things first, they have to start taking care of business at home. They will get that chance this week as the defending Stanley Cup champion Los Angeles Kings come to town on Tuesday night. The Nashville Predators will be in town on Thursday night then the San Jose Sharks will be here on Saturday night. 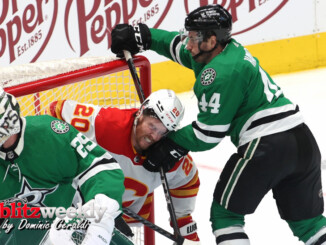