Yogi Berra often would speak of recurrences like ‘Deja Vu All Over Again’ when it comes to baseball.

In light of the weather that befell North Texas earlier last Saturday. You might recall last year’s Iron Skillet Bowl was played in an absolute monsoon of weather conditions over in Park Cities.

Saturday’s yearly get together took us back to Ft. Worth for an early start time. This after a 16 day break from what was a frustrating loss in Lubbock to the Red Raiders.

You would think the time off would make for a crisp and concise level of play from TCU, right?

Once again the offense of TCU began sluggishly before the saturated fans started to see a power surge of scoring in the 4th quarter. So much so that the TCU Frogs put up 31 4th quarter points in a 48-17 win over the Mustangs. That was the most points scored by any team in he NCAA since Kansas State turned that trick 9/1/12 in a game against Missouri State.

Credit Gary Patterson for the second half turnaround, if you like pep talks.

“I got after the offense pretty good at halftime,” Patterson said. “They’ve got to start understanding at some point in time that they have to look at themselves. They did a better job in the second half.”

Sophomore Quarterback Trevone Boykin began his afternoon only 7 of 16 to the sound of boo-birds inside Amon Carter as SMU jumped out to an early lead of 7-0 and 10-7 at the half. Boykin would start the second half 7 of 9 with two scoring strikes of 20 and 56 yards to Ty Slanina and JuJuan Story. In the end Trevone Boykin went 15 of 26 throwing for 228 yards. Boykin was quick to admit to the needed spark.

“It was like we played with more emotion,” Boykin said. “We were pretty flat and just trying to make some plays with our athletic ability and things weren’t going right for us. We were killing ourselves with offsides and personal fouls, but we made some good halftime adjustments and tried to stick to our game plan as well as possible and we came out with the win.”

Garrett Gilbert got the ball rolling for SMU at 4:41 on a 1 yard pass to Jeremy Johnson. Waymon James would knot things up at 7 at 14:41 of the 2nd quarter on a Waymon James 2-yard run. A Chase Hover field goal right before intermission allowed the last lead they would see as TCU collected the Iron Skillet for the 11th time in 13 years under Coach Patterson’s watch.

Garrett Gilbert in defeat would complete 23 of 44 passes for 276 yards along with four interceptions. Before the Purple Reign kicked things into high gear the last 30 minutes Gilbert was hopeful.

“Our defense played a heck of a game today,” Gilbert said. “Offensively that’s completely on us. We didn’t keep them off the field by sustaining drives in the second half. Felt great about the first half, played well, thought we had some stuff to build on.”

With no rushing game to speak of for SMU (18 yards on 10 carries) TCU exploded for five scores on five straight possessions. Jaden Oberkrom with a 35-yard field goal at 8:56 in the 3rd period. Four minutes later Ty Slanina caught a 20 yard touchdown to make the score 17-10.

JuJuan Story’s 56-yard grab 11 seconds into the 4th quarter gave TCU a 24-10 lead. That lead would then extend to 31-10 on a BJ Catalon scoring run at 10:33. Special teams would account for the final two scores of the day with less than three minutes to play on a 45-yard LaDarius Brown kickoff return and a Sam Carter 66-yard interception for paydirt.

TCU improves to 2-2 while SMU falls to 1-3. June Jones was quick to admit the nature of the swing of momentum in this yearly matchup.

“We had a blocked punt that we didn’t score and only got a field goal out of it,” SMU coach June Jones said. “You got to score touchdowns, but we gave them an opportunity to feel like they had some success.”

Darius Joseph would catch an 11 yard Gilbert strike for the Mustangs last score in period three. Joseph with 11 catches for 159 yards in a losing effort.

TCU standout Devonte Fields did not play due to injury. He wasn’t needed as his cohorts did just fine with four picks and seven sacks. James and Catalon would combine for 99 rushing yards on 20 carries.

It’s now on to Norman, Oklahoma for a 6 pm showdown with the #11 ranked Sooners. 1 week before the Red River Rivalry here in Dallas, there have been instances of either Texas or Oklahoma suffering a loss one week prior to their yearly meetup. Perhaps October 5th will be one of those days. TCU will then host the Jayhawks hours after the Red River Rivalry has kicked off at the Old Cotton Bowl.

As the rains came to Ft. Worth during the course of the game and the afternoon, not quite unlike what was witnessed last year in Park Cities one had to wonder if the rainfall was like a combination cleansing AND a much needed anointing.

How about a little bit of both? 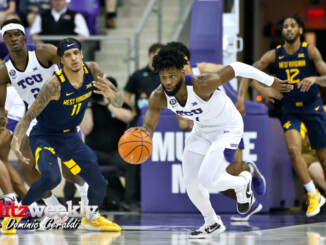 It’s How You Finish!