Numbers are telling. Numbers sometimes contain irony, and sometimes numbers are something you’d much rather turn your neck and just cough without seeing the painful consequences when an inevitability of a beating is straight ahead.

How else to describe an early ten point lead over the Raiders of Texas Tech before Kansas fell victim to 54…yes FIFTY FOUR unanswered points by Team Kliff Kingsbury in getting to 5-0 for the 1st time since 2008.

It happened while starter Brian Mayfield fell victim to injury. An injury that appears to be serious.

“I just saw him limping off and he wasn’t putting much weight on that (right) leg,” said Kingsbury. “I’ve got to talk to the docs and see.”

Mayfield before the mishap was 33 of 51 passing with one pick before going down. The irony to all this was that in October of 2007 I was in the stands at Kyle Field when Kansas set the all time record for wins in a season since 1909 when defeating the Aggies 19-11 on Maroon Out Day. Since 2008 the news has not been as good for the Jayhawks of Lawrence, Kansas.

While the eyes of the nation will focus their attention on the Red River Rivalry in downtown Dallas Kansas (2-2 0-1 Big 12)  will now travel to Ft. Worth’s Amon Carter Stadium to battle the TCU Horned Frogs (2-3 0-1 Big 12). My guess is this will not be a pretty day for the fans of KU.

Some numbers to ponder
While both TCU and Kansas lost to powerhouses in the Big 12 who are now 5-0, Kansas now possesses an all-time record of 1-14 when playing Texas Tech.

Kansas has lost its last 22 straight matchups against the Big 12.

Punter Trveor Pardula two weeks ago was a hero with five punts and a 57 yards per punt average. Last Saturday when facing a punting scenario (Homecoming crowd in Lawrence) he chose to run instead and got tackled deep in Jayhawk territory. Then came the onslaught.

Charlie Weis commented on the wisdom of that play.

“It was based on whether something happens, you have to take it,” Weis said. “And he kind of got caught in that gray area. In hindsight, he wouldn’t do it. But if he had a certain look, he was able to do that.”

Leading the way at quarterback for Kansas will be Jake Heaps. Heaps will lean heavily on Wide out Jimmay Mundine. Sophomore running back Darian Miller will get most of the touches alongside Senior James Sims.

TCU coming off a tough loss to the Sooners 20-17 last week in Norman. Truly a defensive battle that was lost on a 76 scoring burst by Brennan Clay that electrified the Sooner Faithful in the building. Once again a Frog game where TCU started slowly and not until the 3rd quarter did Trevone Boykin start to generate some scoring opportunities.

Gary Patterson addressed this and other topics in his weekly press conference.
“Week six, the University of Kansas. Second straight week in the Big 12. We get a chance to come back home and play. We need to find a way to win.”

What about TCU having been given the most difficult schedule in 2013?
“We knew what we were getting into. We knew what LSU and Oklahoma were going to be like. Texas Tech was a bit of a surprise. They played well. We’re still very close to being able to win some ball games. The kids are playing hard. Somebody asked me about the defense yesterday. I like them because they like each other, and they play hard for each other. Offensively, if you look back over the last three seasons, we’ve started slow each year. You just have to get ready to go.”

Where do you feel TCU should rank nationally?
“TCU has two wins and three losses. The key is to win ball games. That has always been the motto. For me, it’s not my first rodeo. I’ve been through all this before. The worst thing that could happen is for people to panic. We’re in a society of instant success. At the end of the season, we’ll see where the chips fall. You just have to understand there are a lot of different things that add up to everything that goes on. No panic here. That doesn’t mean I’m happy. Everything usually goes down from the top. Let’s go see if we can find a way to beat Kansas.”

Can you talk about the amount of involvement you have with the offense?
“All the time. We talk about it in the spring. I defend them. We do team emphasis, so I get a chance to watch them during practice. There’s also a lot better defense being played in the league this year. You just have to keep it all in perspective and go with it. Does that make me happy? No. We need to score more points. If we would have made Oklahoma kick field goals, we would have won that ball game. When we won at Oklahoma in 2005, we beat them 17-10. We scored the same amount of points Saturday, but we held them to 10 in 2005. You have to give Coach (Bob) Stoops, (OU Defensive Coordinator) Mike (Stoops) and their staff a lot of credit.”

That being said on paper this looks like a game that TCU should absolutely dominate from beginning to end. We haven’t seen a game like this yet from the Horned Frogs in 2013. Maybe Saturday will be the day. TCU loves playing at 11 am. Beginning with last year’s contest at Kansas, the Horned Frogs are 4-1in11 am games over the last two seasons. Saturday will mark TCU’s third 11 am kickoff in three home games this year.

Even though Kansas has not played TCU at Amon G. Carter Stadium since 1996, the Jayhawks did play at TCU in 2005 when they faced Houston in the Fort Worth Bowl.

Saturday’s game will be a homecoming of sorts. TCU linebackers coach DeMontie Cross served in the same capacity for Kansas last season. Kansas defensive line coach Buddy Wyatt was a four-year letterman (1986-89) for the Horned Frogs.

TCU football coach Gary Patterson was born in Larned, Kansas, and is a native of Rozel, Kansas.

Saturday’s meeting will be the first for Charlie Weis in Ft. Worth. TCU since 1999 loves protecting the home turf going 71-11 in 82 home games. 60-11 under Gary Patterson at Amon Carter Stadium.

On the injury front a foot injury that has hampered Devonte Fields since the Texas Tech game will keep him out of action for the rest of the season. Shutting Devonte makes sense now as he is eligible for a medical redshirt and will be available to play the next three years. May Devonte’s foot heal quickly.

Weather may be a factor this weekend in North Texas. If that is the case I look for the special teams to play a huge factor in what should be an easy TCU victory. Look for BJ Catalon to lead a successful ground game and for Trevone Boykin to go the role of bus driver. TCU 38-13 as Kansas will fall for a 23rd consecutive time. 23 also has numerical meaning. Google the number and happy reading. 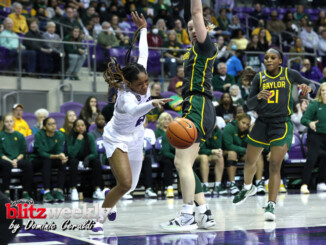