Quite a turnaround for the TCU Horned Frogs after a win at home last Saturday over the Lions of SE Louisiana 38-17.

The win was not without a cost as QB Casey Pachall will now miss up to 6-8 weeks after having had surgery on his non-throwing hand after a sideline tackle where Casey landed awkwardly on his arm. The replay was downright scary. Here’s wishing the kid a speedy recovery.

This also means that Trevone Boykin will now lead this team for better or for worse.

It should be noted that last week Trevone became the only Quarterback in TCU history to lead in passing yards (133) and receptions (3) in the same game.

This rivalry with the Horned Frogs and Texas Tech goes all the way to 1926. Thursday night will mark the 56th meeting between both teams with Texas Tech holding the overall advantage 29-23-3. In last year’s overtime thriller Trevone Boykin became the first TCU signal caller to pass for four touchdowns in back to back games. Boykin also threw for 332 yards in last year’s game.

Trips to Lubbock have not been kind to TCU since 1991. The Frogs have lost their last three meetings in the land of Buddy Holly while possessing an overall record of 5-17-3. At home the record is better at 18-12. Under Gary Patterson TCU has an 8-5 record in games played under a short week. The last Thursday game played was successful when TCU outlasted Texas last Turkey Day 2013.

Gary Patterson addressed the media on a myriad of topics and here is an excerpt of what he discussed about what lies ahead for the 24th ranked team in the nation.

On this week’s game …
“It seems like it has gone fast. We’re already in the third week of the season. Two Louisiana schools – LSU and then Southeastern Louisiana – and we’re 1-1. Now we go into conference play. Last year, the second week of the season we had Kansas and now we’re out in Lubbock on a Thursday night. It’s a hard place to play. Texas Tech is 2-0, and they’ve scored 102 points in two games. They can really move it, they’re playing well on defense and doing some things on special teams. In conference play, it’s always a tougher game. We’re going into a black out. We have to get ourselves ready to play.”

On Texas Tech freshman quarterback Baker Mayfield …
“I knew he was a winner in high school. He won a lot of ball games, threw for a lot of yards and comes from a great family. Sometimes, guys have ‘it’ factors. They’re good players and when you put them in on Saturdays, they do the things they need to do.”

On the challenge of facing Texas Tech’s offense …
“They do a nice job of making you play. They’re faking it, reading it, throwing the bubbles and the hitch screens. That is getting the ball in the hands of their good players. (Jace) Amaro, the tight end, is a draft choice probably in the first couple rounds. He’s 6-foot-5, 260 pounds and can run. They have good wide receiver sets. They’ve got a couple guys who can make you miss. When you have guys who can beat people one-on-one, that always causes you nightmares because you hate being in space and they do a nice job with that.”

On TCU quarterback Trevone Boykin this season compared to last year …
“It’s not even close. We had to talk him into coming to watch film on his own. In high school, you showed up and practiced, and you showed up and played. Very few kids come where their dad was a head coach, like Jason Phillips. From the very first day, Jason was bringing a sandwich at lunch time into the film room and watching on his own. Nobody asked him to. He was just in the linebacker room watching. Andy Dalton on Mondays was probably watching four hours of film after class. At some point in time if you want to become great, you have to become a student of the game. I think Trevone has become a lot more of a student of the game. That is the one thing Tyler Matthews has been from the beginning. Tyler has probably been more of a film watcher than any of the rest of those guys. Casey (Pachall) has really turned around this summer, as I’ve just been watching guys come in and out of the office.”

On Casey Pachall …
“One of the things that was great is that he walked in my office on Sunday. We had a little bit more up-tempo Sunday practice because of playing on Thursday. We talked about how he was doing. He was pretty matter-of-fact about the whole situation. He wanted to make sure he could help coach, and he wanted to know if he could travel. We will take him on the trip to Lubbock to help the quarterbacks and watch what is going on. It is exactly what I had hoped he would be like if something like this happened. He could be asking why this is happening to him and thinking life isn’t fair, and he hasn’t been that at all. He was out at practice both Sunday and Monday, and I expect him to be out there helping today.”

On when he expects Pachall to return …
“I have no idea. The little bit I know is that there are ‘x’ amount of weeks you should be out to really be safe, and there are ‘x’ amount of weeks where you say you could play but you still have some risk. It’s like when guys go out for the NFL Draft. I don’t tell them they should go, and I don’t tell them they should stay. I give them the pluses and minuses. If I tell them to go and it doesn’t work out, then they don’t get their degree and it’s my fault. If I tell them to stay, they get hurt and don’t get drafted as high, it’s my fault. I’ve been one of those guys that just lays out the pluses and minuses. The same thing when we get to that point with Casey. We’ll look at the pluses and minuses. At a certain point in time, he’ll be able to throw because it is his non-throwing arm. It’s about when he can get back into competition and take a hit. That is the crux of the whole matter.”

On the importance of the Texas Tech game …
“You will always see that this ball game will have a high emotion out of both teams. I think we end up recruiting in the state against each other the most, along with Baylor. That is why there are more kids that know each other.”

It should be also be noted that TCU likes playing the Big 12. Note the 4-1 record last year on the road. Thursday night’s game will begin on ESPN at 6:30PM with Rece Davis, Jesse Palmer, David Pollack, and Samantha Ponder manning the sidelines.

The Horned Frogs and Red Raiders have met just three times since the Southwest Conference dissolved after the 1995 season. Texas Tech won the first game, 70-35, in Lubbock in 2004. TCU then earned a 12-3 victory in Fort Worth in 2006, before the Red Raiders’ 56-53 triple-overtime win in Fort Worth last season. Do I think we’ll see the same kind of fireworks tomorrow night?

My guess is no as the Red Raiders continue to familarize themselves with new coach Kliff Kingsbury and a rookie play-caller Baker Mayfield who can run and throw as evidenced by the 41-13 and 61-13 victories on SMU and Stephen F. Austin. Eric Ward will be Baker’s primary receiver.

I pick Tech to make things hectic for TCU to the tune of 47-40. No overtime, but some great special teams once again by BJ Catalon. 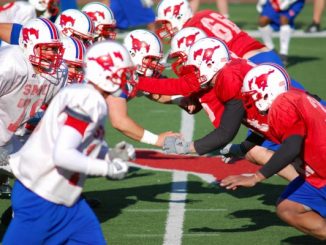