A tough month of May with four 2-1 losses and one bad performance at the nations capital in a 4-1 defeat.

FC Dallas had a very memorable season of summer where the win, draw, but not lose was the mantra of the hotter months.

An August 30 trip to the Windy City would finally cool off the warm momentum of true Texas Heat on the soccer field they call Toyota Field in Bridgeview, Ill.

The Fire (5-6-14 29 pts) needed a win to remain within the playoff chase of the Eastern Conference while FC Dallas (12-8-6 42 pts) had a chance to forge a tie in the West with a win and a Seattle Sounders loss.

A match that looked to be an imminent draw and another point for both sides proved otherwise in the 83rd minute when Robert Earnshaw would collect his second goal in as many games. The score happened only after the kid from Wales was set up on a centering feed by Jeff Larentowicz to blast the ball from the left beyond reach of El Matador Raul Fernandez for a 1-0 victory.

Just like that a ten game stretch of points accrued came to a sudden and crushing stop. The Fire kept their slim playoff hopes alive before an appreciative crowd of 16,824.

Ryan Hillingshead had a chance to get on the board for FC Dallas in the 52nd minute and break the scoreless deadlock only to hit the crossbar.

FC Dallas remains entrenched in third place as they now go on the road to play Real Salt Lake at Rio Tinto Stadium on September 6th before a return date to Toyota Stadium September 13 against the White Caps of Vancouver.

This summer there was no fading away or hitting of a wall. With eight more games remaining for Team Pareja they want to remain consistent, gain points, and maintain well enough to get to the playoffs come the latter half of October.

With the Sounders playing a mid-week  game against the team of Chivas USA if the goats can pull off the win FC Dallas has a good chance to keep close to the top in the West, much less being in the top three for a playoff spot.

Don’t expect a letdown with this year’s FCD. Too much youth, poise, pride and defense playing into their favor.

Along the Astro Domian 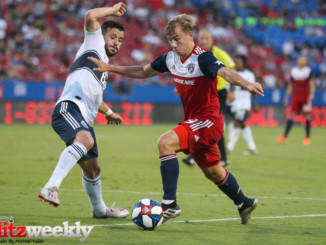