A successful undefeated exhibition preseason, a fun run of training camp in Ft. Worth, a new slew of faces and matchups leading up to the fun and excitement of Opening Night for the NHL Thursday night at the American Airlines Center had a little but of everything. That is, except for a win!

The good people of Dr. Pepper were gracious enough to line all 19,000 seats with a Victory Green Dallas Stars tee shirt with the new logo.

Dignitaries like Kyle Orton, Derek Holland, and Vinnie Paul were in the building partaking in the festivities.

Thursday night was my 11th Opening Night since coming to Texas. Hockey is a sport easy to absorb while baseball goes into its time of hibernation. It never gets old. The excitement is very evident amongst the fans and the new ownership. It is after all a new era. Like the ads say, ‘A New Star Is Rising’.

The Florida Panthers were the opponent for Opening Night 2013. The scoring would commence at 17:41 of the first period when Scottie Upshall fed Scott Gomez with a behind the net pass that Gomez backhanded for a goal and a Panther 1-0 lead.

Dallas bounced back to knot the score at 1-apiece when Brendan Dillon and Ray Whitney assisted Alex Chiasson at 7:32 of the second period with a backhanded wrap around goal on Tim Thomas right before the net would get knocked off its foundation.

Period three would see four goals scored beginning with the Stars grabbing a 2-1 lead at 7:32 when Brendan Dillon would skate right into a scrum around the crease and fired a shot past Thomas with assists from Antoine Roussel and Vernon Fiddler. And a shorthanded goal at that!

At 10:32 Alexander Barkov became the second youngest player since 1942 to get a goal (at 18 years and 31 days) for the Panthers to tie up the Stars 2-2. Assisted by Tom Gilbert and Huberdeau.

Panther coach Kevin Dineen was happy with the win as they start 2013 with four games on the road.

“It had a lot of aspects to it: Our young players coming through and making a difference, a really nice goal, our veteran guys stepping up when they needed to,” Florida coach Kevin Dineen said. “It was a mixture of things. That was a hard-fought win.”

Lindy Ruff offered an equal assessment on his team.

“We just didn’t play well enough,” Ruff said. “Any time you give up [39] shots, you’re going to have trouble. Maybe we thought it was going to be a little bit easy. We didn’t win enough battles. We went by too many battles tonight, and stopped on pucks.”

While the many in attendance left in frustration one could sense the renewed excitement for a new season and for the new tandems in the wings, at center, and defense. The line of Jamie Benn and Tyler Seguin will in all probability make fans forget about what Brad Richards used to do here. The mix of young and old will potentially mesh well enough for a playoff re-entry after five years away.

The lineups you can expect to see to start 2013 on offense and defense are as follows:

The Washington Capitals make a weekend stopoff before a five day break and a week long road trip to Winnipeg, Minnesota, and Colorado before the next home game on October 17th with the San Jose Sharks.

It occurs to me that Pantera is Spanish for Panther. I’m guessing this will make Vinnie Paul happy. Woe to the person who sits in his seat without putting on his Stars shirt. NOT Cool! 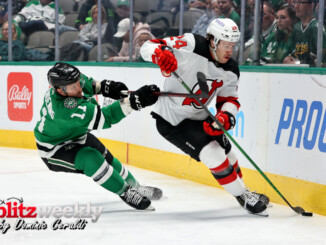 Make It Easy On Yourself Give’em Food For Christmas