As best I can determine, the term “Hot Stove League” was coined around the turn of the 20th century, although the origin is uncertain. I saw one reference that said it probably was a sports writer who made up the term and that was an uplifting thought. It’s great to know that sports writers have been accused of making stuff up for more than 100 years. What a great tradition.

At one time, the Hot Stove League was pretty tame. That was in the days before talk radio and the Internet. Breaking news during the baseball offseason usually originated in The Sporting News, which for a century or so was known as the “Bible of Baseball” and was printed once a week.

But now, the Hot Stove League constantly roars out of control, burning like a monstrous bonfire because of the world we live in. A result of the relentless chatter in the off season — which has made baseball, and for that matter, all the other sports a 12-month news operation — is that there is an overreaction to everything. And I literally mean everything.

The result is that once a thought is made public, it becomes a debate. And the debate is not confined to a weekly magazine or daily paper. It is splashed across blogs, gurgled on radio and intensified by the Worldwide Leader in Sports.

Too often, even if the thought is misguided, it becomes the foundation of the debate, which leads us — in a long winded way — to the Texas Rangers.

How much optimism did you hear or read in the offseason? The Rangers lost Josh Hamilton, Michael Young and Mike Napoli. They were going to start the season without the rehabbing Colby Lewis and Martin Perez.

They were noticeably quiet in the offseason. Even when they signed Lance Berkman, they were panned for paying a 37-year-old hitter with bad knees $10 million. Signing A.J. Pierzynski produced a shrug. And that was before opening day starter Matt Harrison had back surgery, which will keep sidelined for three months.

But Rangers GM Jon Daniels never panicked, which, perhaps is a result of having a memory that is longer than a Twitter message. Whenever he was grilled about not replacing departed players, Daniels would say something like, “We like what we have. We like our team, and we want to give some of these young players a real opportunity. Some of the guys, we believe, are winning players, and we want to take a good look at them and see what we’ve got.” Last October, Daniels  watched as his team fell apart late. At one time, the Rangers led the American League West by 13 games. With nine days left in the season, they led Oakland by five games. But Oakland swept the final three-game series, forced the Rangers into playing a one-game wild card game against the Orioles, who ended Texas’ season with an easy 5-1 victory.

It wouldn’t seem that hard to connect the dots. If Oakland can compete with only top-flight young players who are  making less than their counterparts, why can’t the Rangers with Ian Kinsler, Elvis Andrus, Adrian Beltre, Nelson Cruz, etc., still compete? Yes, they lost a lot of home runs when Hamilton went to the Angels, but they also lost a lot of distractions and airhead play in the field. This was a team that still had major players from the two World Series teams, so the idea that they were going to plummet in the standings was hysterical in a bad way.

The Rangers also had quality pitching in the form of Yu Darvish, who simply has been the best in the Major Leagues this year. Derek Holland and Alexi Ogando (before he went on the disabled list) may not be sure things, but they are quality pitchers and they’ve performed well. And Joe Nathan is at the top of the list of great closers in baseball.

Some of the same critics who were so negative about the Rangers are the same people who praise the Texas farm system, but Daniels was apparently the only one who believed the young talent was capable of coming through. Rookie starters Nick Tepesch and Justin Grimm have been, at times, brilliant and second-year pitcher Tanner Scheppers has embraced the setup role like a 10-year vet.

The bottom line is that one-quarter of the way into the season, the Rangers had the best record in the American League and were tied with the St. Louis Cardinals for the best record in baseball. And at some point during the season, Lewis – the Opening Day starter in 2012, Perez and Harrison should return. In August, Neftali Feliz, who had Tommy John surgery, could also be back.

Meanwhile, how are those Angels doing?

One quarter of the season does not a season make. The A’s once again have a low payroll but a competitive team. The Angels at some point have the talent to put together a long win streak. A lot of time remains.

But as strange as it sounds, the Rangers have a winning pedigree. It wasn’t that way for the first 37 seasons when the Rangers were the Clippers of baseball.

They now have established players, excellent pitching, a manager who is great at getting maximum effort from his  players and there is no reason not to be optimistic. The Rangers may not win the AL or the World Series, but if healthy, they will remain competitive at the very highest levels of baseball. And they will prove that sometimes the predictions from the Hot Stove League are nothing more than ice cold. 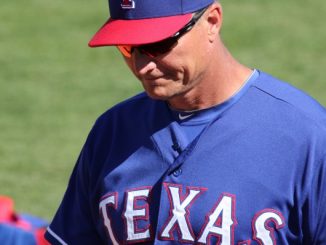