The last time we saw the Baylor Bears they were leaving Mountaineer Field at Milan Puskar Stadium after being upset by the Mountaineers 41-27. After being off last week, the Bears are still in a good position to win another Big 12 title, but need some impressive wins down the stretch for the College Football Playoff selection committee to see.
After Baylor’s dreams of an undefeated season were dashed, coach Art Briles used the bye week to his advantage even though the Bears were itching to get back on the field.

Now Baylor is among a crowd of one-loss teams, with No. 1 Mississippi State and No. 2 Florida State the only remaining unbeatens from power-five leagues. In the Big 12, West Virginia (6-2, 4-1) still has to play TCU and first-place Kansas State, while Baylor will host the first-place Wildcats (6-1, 4-0) on Dec. 6.

Saturday’s game will be based around two different streaks of opposite proportions. Baylor has won 13 consecutive home games (only Auburn with 14 in a row has a longer active streak), and 22 of its last 23 in Waco.

Bryce Petty will try to get the offense back in high gear against the Jayhawks (2-5, 0-4), who are also coming off a bye week after extending their losing streak to four games with a 34-21 loss at Texas Tech on Oct. 18.

Petty completed 16 of 36 passes for 223 yards and two first-half touchdowns against the Mountaineers after throwing for a career-high 510 yards with six scores versus TCU. Even in a losing effort star receiver Antwan Goodley did his part with a season-high nine catches for 132 yards and a touchdown.

The Jayhawks will try to find holes in a Baylor defense that has allowed 99 points and 668 passing yards the past two games.

When things are said and done I expect Baylor to cruise to victory and take out some frustration with a 55-14 victory to get back on track. 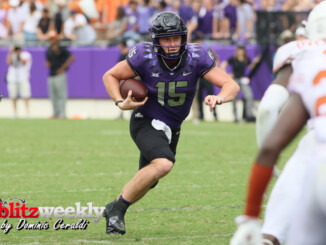