Anyone who two weeks ago thought the Texas Rangers would be back atop the American League West division by this week is either lying or on drugs.

But in what is becoming a true Jekyll-and-Hyde season, the team went from six games behind the Oakland A’s to one game ahead of them with just 43 games left. Texas achieved that amazing turnaround by winning their eighth-straight game Monday in Houston, part of 13 wins in their last 14 games. The 9-1 road trip in Oakland, Los Angeles and Houston was the best in club history.

“It’s coming from everywhere – pitching, defense, running the bases, everyone up and down the lineup contributing,” manager Ron Washington told Fox Sports Southwest. “It’s team baseball. When we do that we’re at our best.

“We want to go home. We’ve been on the road for 11 days. We just have to continue to play good baseball and continue to take it against the opponents we’re playing. We can’t ahead of ourselves and I don’t think that will happen.”

The Rangers have achieved their latest success in large part because of their running game, late scoring and strong pitching. Interestingly, the three straight they won against the Angels and four at Houston came after the regular season of right-fielder Nelson Cruz ended when he accepted a 50-game suspension for allegedly purchasing performance enhancing drugs from the Miami-based Biogensis wellness clinic. And it came amidst the acquisition of outfielder Alex Rios from the Chicago White Sox to fill the void left by Cruz.

“We’re playing pretty good baseball,” said second baseman Ian Kinsler. “We’re just focused on each day and being preparing to win each individual game. Whatever it takes, it takes us. We’re not worried about records or best road trip or anything like that. We’re just worried about winning as many games as possible.”

The Rangers wrapped up the sweep of the Astros with the first complete game by Martin Perez on Sunday and a career-high 15 strikeout performance by Yu Darvish on Monday. Darvish gave up just one hit and one walk as he came up just short again of a perfect game in Houston. That gave them a 69-50 record, best of the season.

Offensively, nobody did it better than third baseman Adrian Beltre, who had a .474 batting average on the road trip with two home runs, 11 runs batted in and 10 runs scored.

Brewers, Mariners start homestand
After being home for just three of the past 17 games, the Rangers start an eight-game home stretch Tuesday night against the Milwaukee Brewers before hosting the Seattle Mariners over the weekend.

Texas and Milwaukee split their two games in Wisconsin in May and will face each other in Texas for the first time since 2007. The Rangers won two of three games that year, the same as in 2010 in Milwaukee.

The Brewers are a shadow of the team that nearly met the Rangers in the World Series two years ago. Besides losing Prince Fielder to free agency a year ago, All-Star outfielder Ryan Braun is sitting out for his own 65-game drug suspension. Plus first baseman/outfielder Corey Hart has missed the entire 2013 season and ace starter Yovani Gallardo is on the disabled list.

Milwaukee, which entered this week with a 51-67 record has been led by All-Star shortstop Jean Segura with a .311 average. All-Star outfielder Chris Gomez leads the team in home runs with 18 and catcher Jonathan Lucroy has the most runs batted in with 61.

No Brewer starting pitcher has more than eight wins while Kyle Lohse leads the team in earned run average at 3.26. Closer Jim Henderson has just 16 saves.

The Mariners entered this week with a 54-63 record, 14 games behind the Rangers, after beating Milwaukee on Sunday. Seattle won two of three games in Arlington in early July.

Designated hitter Kendrys Morales has the best Seattle batting average at .292 and runs batted in with 62. Veteran outfielder Raul Ibanez tops the team in home runs with 24.

Felix Hernandez has the most wins with 12 and earned run average at 2.28. Closer Tom Wilhelmsen has 24 saves. 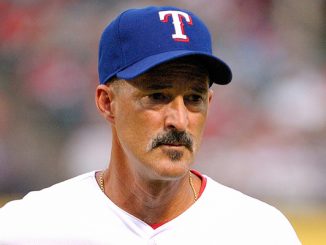