Who do the Cowboys need to shut down?
DT Ndamukong Suh – The NFL continues to prove to be the worst parents in the world, overturning the initial one game suspension for Suh politely stepping on Aaron Rodgers’ already injured ankle and calf. This is such a break for the Lions, because Suh is a tyrant. If the guy cut out the bull, with his “dirty” play, there’d be almost no holes to his game. He relentless, he’s got a tank of power, and that motor that sometimes gets himself in trouble, is always on the redline. Suh’s pressure helps the back end, which on their own, the safeties don’t need much help. The Cowboys offensive line can contain Suh, but if he slips a block, Suh can do some damage.

Who on the Cowboys, needs to step up?
The Cowboys Pass Rush – The Lions offensive line is good, but nothing special, especially if they have to play this game without Larry Warford. The “Rushmen” are going to need to get after Matthew Stafford; Jeremy Mincey, Tyrone Crawford, George Selvie, Terrell McClain, and Anthony Spencer need to work at maximum disruption mode to help the Cowboys’ secondary against Golden Tate and Megatron.

Which group will give the Cowboys fits?
The Lions Pass Catchers – We all know Megatron, and the last time that Calvin Johnson played the Cowboys, Brandon Carr got left on an island and Megatron caught 14 passes for 329 yards, the most receiving yards racked up in a 60 minute game. That tank shell seemed to take Brandon Carr’s treads off, and over the last few games, Brandon Carr seems to have found a groove. But it won’t have to just be Megatron wreaking havoc alone, in times when Megatron was in the hanger for repairs, Golden Tate for six weeks, was one of the top receivers in the league. Tate better double buckle his chin strap, because Barry Church said that he might barely color within the lines of the rules for a shot on Golden Tate for payback on a peel back block on Sean Lee from 2012. The rookie tight end, Eric Ebron, hasn’t torched the stats sheet, but is still a matchup to look out for with Anthony Hitchens possibly missing the game.

Which group will give the Lions fits?
The Cowboys Run Game – The Lions have only allowed two teams all season long, to rush for more than 100 yards in a game, the Jets for 132 yards and the Packers last week picking up 152 yards on the ground. It’s not just DeMarco Murray’s talent and vision that will be a huge boost against the top ranked rushing defense, it’s the Cowboys’ commitment to the run. The Cowboys haven’t been taken off their game plan at all this season, even when down 21 points to the St. Louis Rams in week three. Two yard gains and little three yard chunks don’t scare the Cowboys away from sticking with the run like it used to.

What will it take for the Cowboys to win?
Continue December. The Cowboys have been kicking tail and taking names, for a month straight and they need that mojo to keep going into the playoffs versus a strong team. Getting the lead, unleashing the defense’s dogs to play extremely fringe and with tenacity. Rolando McClain’s return is huge, Tony Romo’s rhythm is catchy and strong and for Jason Garrett, he and Romo need to remember that Detroit has got two comebacks on them, and need to remember that a lead isn’t safe.

Prediction: Dallas 35 – Detroit 27
The Detroit defense will have their hands full with the full offensive line compliment. The Dallas defense will give up their chunks through the air, but will contain Joique Bell and Reggie Bush. 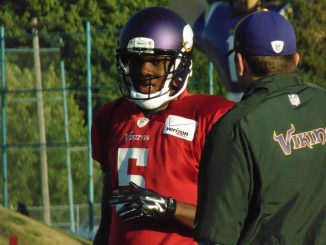