The Dallas Stars only played two games this past week largely due to the three-day Christmas break. They were successful in one and not so successful in the other. We will start with the unsuccessful one last Tuesday night against the Toronto Maple Leafs at home. The Stars were coming off a terrific road trip winning all three games and four straight overall. They looked poised to continue that momentum at home but unfortunately ran into a wall. It was not even a minute into the game when Maple Leafs forward Nazem Kadri put one past Stars goalie Kari Lehtonen to put his team up, 1-0. It remained 1-0 in the second period before the Leafs were able to get a couple of goals to go up, 3-0. The Stars did not go without trying as they peppered Leafs goalie Jonathan Bernier with 43 shots. Some of those shots they should have buried in for scores, but it just was not their night as Toronto won, 4-0.

After the game, Stars forward Jason Spezza explained why it was not their night. “They won special team battles tonight,” Spezza said. “We had a lot of chances that we didn’t bury and they got the first goal that gave them life. They were coming in here losing games and when you give the first one up like that, it gives them life.” Stars forward Vern Fiddler pretty much agreed. “We just didn’t come out,” Fiddler said. “We were flat, we gave up an odd-man rush off the start and you’re down 1-0 so it wasn’t a good way to start. We take a penalty and then a power play goal and we’re down 3-0 going into the third so it’s not a good spot to be in. It’s disappointing, but at the same time we have to regroup. Take these three days for a mental and physical break and get back to work in St. Louis.”

It was a disappointing performance all around, but this team appears to be headed in the right direction. They outshot the Maple Leafs, 43-26, and won the faceoff battle, 38-33, but they could not get anything on the scoreboard. Fortunately, the three-day Christmas break came at the right time for this team to re-energize themselves and get back at it as they did last Saturday night on the road against the St. Louis Blues. The Stars were looking to record their first division win of the season and they did not waste any time getting on the scoreboard as Stars forward Travis Moen scored to put them up, 1-0. The Blues quickly tied it before the Stars regained the lead again thanks a goal by forward Ryan Garbutt. Again, the Blues quickly tied the score thanks to a power play goal from Blues forward Vladmir Tarasenko. After that, it was all Stars from there as they were able to get two more goals in the second period to get their first win of the season against a divisional opponent by winning, 4-3.

“We found a way to come in here and get two points, that’s all we came for,” Stars captain Jamie Benn said according to NHL.com. “Finding a way to play with that one-goal lead finds ways to win games. It’s time for us to start locking down leads we have and I think we did a pretty good job tonight.” It definitely was a good win. They are now back over .500 at 15-14-5 with 35 points having won six of their last eight and are within striking distance of a playoff spot with a lot of games still to be played.

The Stars will get back after it on Monday night when the New York Rangers come to town. Then the Arizona Coyotes will be here on New Year’s Eve. The Minnesota Wild will be in town for a Saturday night affair before the Stars travel to Chicago to take on the Blackhawks on Sunday night. 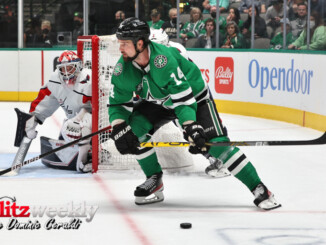 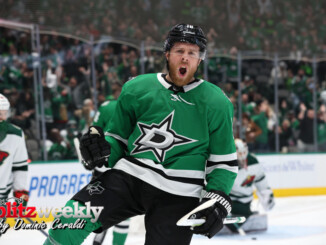