The Dallas Mavericks announced their 2022-23 schedule today, which begins on the road with a Western Conference Semifinals rematch against Devin Booker and the Phoenix Suns on Wednesday, Oct. 19, at 9 p.m. CT on ESPN.

The 2022-23 campaign will mark the 43rd season in Mavericks history, including the club’s 22nd playing at American Airlines Center.

Dallas is scheduled to play 30 nationally televised games, including 10 on ESPN, nine on NBA TV, seven on TNT and four on ABC. The team’s local broadcast schedule will be announced at a later date.

After opening the year at Phoenix, the Mavericks will return to American Airlines Center to face Ja Morant and the Memphis Grizzlies in their home opener on Saturday, Oct. 22, at 7:30 p.m. CT on NBA TV.

Eleven of the Mavericks’ first 16 games will be played at home while 10 of the team’s final 16 games will occur on the road. Dallas is scheduled to play a season-high 17 games during the month of December.

The Mavericks will host Stephen Curry and the defending NBA champion Golden State Warriors twice in 2022-23 (Nov. 29 and March 22). LeBron James and the L.A. Lakers will also make two trips to American Airlines Center (Dec. 25 and Feb. 26), both of which will be matinee games carried exclusively by ABC. The matchup with the Lakers on Dec. 25, which is set to tip off at 1:30 p.m. CT, will mark the franchise’s third consecutive Christmas Day contest.

Reigning two-time league MVP Nikola Jokić and the Denver Nuggets (Nov. 18 and 20), Kawhi Leonard and the L.A. Clippers (Nov. 15 and Jan. 22), and Booker and the Suns (Dec. 5 and March 5) are among the other teams set to visit Dallas twice this season.

Jayson Tatum and the reigning Eastern Conference champion Boston Celtics will make their lone trip to Dallas on Jan. 5, while Giannis Antetokounmpo and the 2021 NBA champion Milwaukee Bucks will make their sole visit to American Airlines Center on Dec. 9.

For the second year in a row, the Mavericks will play three five-game road trips (Jan. 8 to 15; Feb. 4 to 11; March 26 to April 2). The club’s longest homestand of the season is a six-game stretch (Feb. 24 to March 7) immediately following the All-Star break.

Fans can conveniently add the full season or home game schedule to their calendar by going directly to mavs.com/addtocal and syncing to their preferred application.

Single game tickets will be made available to current season ticket members through an exclusive presale opportunity beginning on Thursday, Aug. 25, at 10 a.m. CT and the general public on Saturday, Aug. 27, at 10 a.m. CT. For more information on becoming a season ticket member or purchasing single game tickets, visit mavs.com or call (214) 747-MAVS. 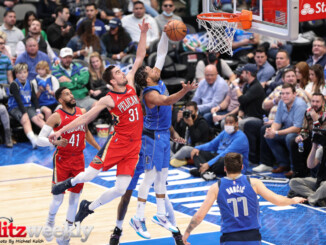