Lawrence, KS. – TCU survived an upset scare last Saturday with a come from behind 34-30 win over the Kansas Jayhawks.

“A lot of people would have lost that ballgame,” TCU’s coach Gary Patterson said after the game.  “There weren’t any style points here other than the fact that we fought back and won the game.”

Both teams added a field goal apiece in the fourth quarter to make the score 34-30. The Jayhawks were moving the ball late in the fourth quarter when TCU’s Chris Hackett intercepted a Michal Cummings pass with just 3:26 left to play to preserve the TCU win and their chance for a spot in the College Football Playoff.

The Horned Frogs are off this weekend and resumes their schedule against Texas on the road in Austin on Thanksgiving night before wrapping up the season against Iowa State back home in Ft. Worth on December 6. 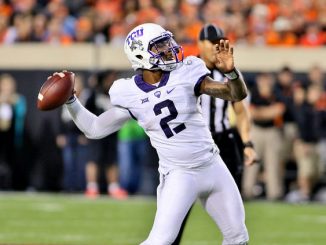 Anointing of the Frog!