It’s Dallas vs Ft. Worth for Metroplex bragging rights!

No one expected the Mustangs to win in College Station, especially coming off the loss to Alabama. And if the Aggies themselves weren’t enough, the 12th man was effective, and to add to it, the refs wanted enough screen time to qualify for an Emmy. 21 total penalties in the first half, 29 by the end. SMU had 16 penalties for 111 yards, a serious epidemic for the Mustangs this season. They could not put pressure on Manziel, and if he felt any form of presence by SMU, he would take off and gain massive yards. This was only the third complete game I’d ever watched of Manziel, last year’s Florida game, the Cotton Bowl rout of the Sooners and this game, I usually just see the highlights and read the stories, but Manziel… he has it. It’s just it. And he’s got it. That doesn’t really make sense, but it does.

The Mustangs and Garrett Gilbert have to do better than shallow crosses, motion sweep plays, and little dink-and-dunk 4-yard completions. And when they went “deep”, it was either batted down, dropped, or brought back by penalty. But really, when you can’t get pressure on the opposing quarterback, while giving up pressure on your quarterback, that’s a losing effort. Gilbert at times looked very good, strong in the pocket; he converted a 4th and 15 in the third quarter, with an Aggie defensive player literally part of his uniform. He remained strong and made the pass downfield; it was one of the few impressive plays by the Mustangs. The Mustangs couldn’t sustain drives and were 5-16 on third down, and it was usually 3rd and long. There seemed to be a lot miscommunication between Gilbert and his receivers, often I’d see Gilbert loft a pass and it’d be off by yards, and his receivers weren’t even looking. And when they did get the ball thrown at them, it’d be a task to bring it in, and a ton of drops ensued. But the Mustangs weren’t going to win this game, and it wasn’t a conference game, so the damage is minimal. And next is another non-conference game versus TCU, at TCU.

Like the Mustangs, TCU lost to Texas Tech, who is climbing up the AP Top 25. And like SMU, TCU is 1-2. The Frogs, like the Mustangs, have a penalty problem. Maybe it didn’t cost SMU the game against the Aggies, but the case could be made that the refs cost the Horned Frogs the game, when they called back a punt return touchdown, they also called back a long gain for a clipping penalty. But TCU should look internally because the freshman Baker Mayfield threw three interceptions, including one in the fourth quarter and got no points. Trevone Boykin was dangerous on the ground, rushing 20 times for 101 yards, but through the air, although he completed almost 64 percent, his two interceptions would sink his team.

Matchup of the Game: TCU Trevone Boykin VS SMU Kevin Pope. Pope was all over the field trying to get to the ball from Manziel and Malena. Boykin has supreme ability. He’s got the wheels, and the Mustangs need to contain him.

Prediction: SMU 21 – TCU 24, a late touchdown run by the Horned Frogs puts them up for the game. 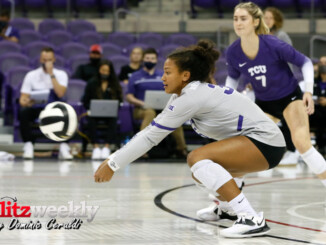