After starting their nine-game road trip on a bad note getting swept at the Cleveland Indians, your Texas Rangers were looking to bounce back last Monday night in the Southside of Chicago against the White Sox. They quickly got off to a 3-0 lead thanks in large part of Rangers second baseman Rougned Odor’s two-run home run in the second inning. Unfortunately, that lead would not last as the White Sox were able to score five unanswered runs to take a 5-3 lead and then win thanks to the game being called in the 7th inning because of rain. The Rangers losing streak on the road stretched to seven at that point.

In the next game, the Rangers again jumped out to a 3-0, but this time they did not stop scoring runs. They were able to put up 16 runs in the game to go on and snap their seven-game road losing streak shutting out the White Sox, 16-0. Rangers starting pitcher Colby Lewis was superb only giving up six hits and striking out seven in a complete-game shutout. His first in over three years and that one too came against the White Sox. “It has been a long journey, that’s for sure,” Lewis said according to MLB.com. “It’s been blessed with the opportunity the Rangers gave me to come back … it was just a good night,” as he continued. No doubt. I guess in a season like this one, you cannot really be surprised by whatever happens especially in baseball. You can have the worst record and put up a performance like this. They carried the momentum of this big win into the rubber match of the three-game series by defeating White Sox star pitcher Chris Sale and his team, 3-1. This would be the Rangers first road series win in almost two months.

After enjoying a day off, the Rangers traveled to Houston and started a three-game series against the Astros last Friday night. They looked like they were on the verge of stretching their winning streak to three games before Rangers reliever Neal Cotts blew a 2-1 lead in the bottom of the 8th inning by giving up three runs as the Astros went on to win, 4-3. “He didn’t make some pitches that he should have made,” Rangers manager Ron Washington said according to MLB.com. “He didn’t want to leave that curveball the way he left on Singleton. He certainly didn’t want that fastball where he put it on Grossman,” as he continued. This is something Cotts has struggled with for most of the season. Whether the game has been tied or with the Rangers in the lead, when he has come in the game he has struggled to keep the lead at times. He did not have this problem last season. Things did not get better the next night, as Rangers ace Yu Darvish had a bad night in an 8-3 loss. He was only able to go four-plus innings giving up six runs with five of them being earned off nine hits.

At this point, the Rangers were looking to salvage a win in the series by not getting swept again by the Astros. They were able to do that with a 6-2 win this past Sunday afternoon. They finished their nine-game road trip with a 3-6 record. Their overall record stands at 46-71 which is good enough to be the worst in the American League. The Rangers return home to open up a four-game series against the Tampa Bay Rays starting Monday night and then the Los Angeles Angels of Anaheim come to town for a three-games series starting Friday night. 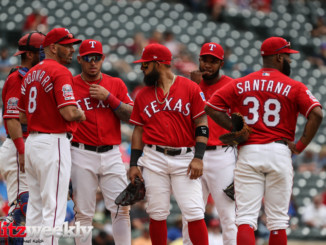 Texas Rangers at the 2019 All-Star Break