For the fourth year in a row I had the privilege of watching and covering the pomp and circumstance that was the 2014 NBA Draft (from the Barclay Center in Brooklyn New York) within the friendly confines of the American Airlines Center that was the #7 Jack Daniels Club.

For only the second time since 2005 the Dallas Mavericks had no draft picks whatsoever in the first two rounds by virtue of what transpired less than 24 hours prior.

In what can only be dubbed a family reunion Tyson Chandler is back as a Dallas Maverick.

This may be a surprise to some but it wasn’t to me. More on that a little later.

With so much talk about the depth of this year’s draft choices it was said that the viewership and interest would be high. Like many other fans, I too wondered exactly where that kid Joel Embiid would wind up. Would he go first or would he slide down the Round One Charts.

For the first time in NBA history a Canadian would be the first pick of a draft courtesy of Andrew Wiggins. This in itself wasn’t the only north of the border phenomenon. It just so happened that there were other players of Canadian descent who would get the pick on an NBA Draft night.

There were some funny moments during the course of 60 picks. Round Two was much, much more chipper and faster. Yes, the Philadelphia 76ers got a stockpile of picks to choose from that which will help the team somewhere down the road.

Having the Lakers and Celtics so high in the first round at #6 and #7 indeed a rarity. It was also a debut for the new commissioner Adam Silver to lead the NBA into the future with the league.

Joel Embiid went #3 to the 76ers. Initially he had a look of confusion when his name was announced. Once he saw the cameras were on him he knew to grin broadly. This was one of a few comical moments.

When the Celtics picked again at #17 (via Brooklyn) the cameras were quick to pan out on Bill Simmons (a lifelong Celtics fan) who gave a huge fist pump when the name of James Young of Kentucky was announced.

Two things that caught my attention this night? Seeing Spartans coach Tom Izzo seated alongside power forward Adrian Payne when he got picked by the Hawks at #15.

Right before the NBA showed why it indeed is a very special fraternity to its own. In light of the bad news given to Baylor standout Isaiah Stewart about not being to pursue a basketball career Adam Silver and team proceeded to honor the seven footer with an, ‘The NBA picks Isaiah Stewart as their next pick in the draft!’

Beyond classy. To the point of driving many to tears. Imagine being told that the very dream you have worked so hard for your life now cannot happen due to a health issue, yet for those who wield the power to make a dream come true…to allow a player to experience the feeling now denied him…this is why I will always respect and appreciate all that the NBA does for its own. This one act alone made my night.

Now back to the whole Tyson Chandler affair. It was back on March 17th when the Celtics came to Dallas to play the Mavericks that a certain radio personality/friend pulled aside and said, ‘Do NOT be surprised when and if Tyson Chandler comes back to Dallas.’

I said nothing and kept the info in the back of my mind until Wednesday around 5pm. I began to smile at the news. Somehow it made sense. Think back to the Mavericks game that was played in New York back in January/February at Madison Square Garden.

It sure looked like Dirk and Tyson Chandler were being awfully chummy pre-game that night. It was also reported that Chandler also gave Rick Carlisle a big bear hug when visiting. With that I say ‘Thank You’ to 105.3FM The Fan’s Chris Arnold for giving me a heads up on what would become inevitable three months later.

While being able to prove collusion is never easy much less plausible what I can share with you is that both Donnie Nelson and Rick Carlisle addressed the throng of media that were in attendance prior to the start of the draft about the return of Tyson Chandler.

“It gives us a shot blocker, rebounder and someone that’s certainly familiar with the system,” Mavs president Donnie Nelson said. “He’s a great guy in the locker room, a running mate with Dirk, a franchise center and it gives us one of the better front lines in the league. And we’re just so happy to have him back. We’re just fortunate and blessed to have him back.”

“Chandler was the one that kind of finished off the making of that roster and that team,” Mavs coach Rick Carlisle shared. “So, now our goal is to see that another title run happens again this coming year.”

For the second time in the Mavericks existence and first time since 2005 Dallas had no draft picks as #s 34 and 51 in the second round, along with Wayne Ellington, Shane Larkin, Jose Calderon, and Samuel Dalembert went to the Knicks for Raymond Felton and Mr. Chandler. Oh yeah, the Mavs went to the Finals that year…

It was actually fun to just watch the draft play itself out and see if indeed Dallas would get into the game in the second round. They didn’t.

Welcome back Tyson! This was a Mavvy-less and Marvelous draft. 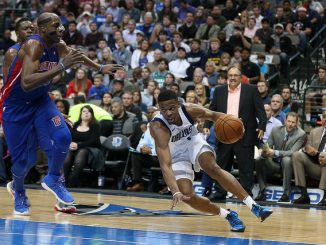