When you talk about all the pomp and circumstance that surrounds a bowl game now more than a decade old and come to realize the magnitude of how much the military means to the game and the community enter Brant Ringler.

“All the things going on in and around the game are important to those who are in our armed services and those who have served,” BHAFB executive director Brant Ringler said.

“Over half the people in the stadium are active duty military personnel thanks to the generosity of our sponsors and related groups. …We also are very fortunate and blessed to have Bell Helicopter as a sponsor of the Bell Helicopter Armed Forces Bowl for the last eight years. This has been vital to the bowl and its activities.”

If not for another commitment I would have killed to have been a part of the pep rally at Sundance Square. No doubt the event brought out a horde of fans and onlookers.

7 am came awfully early with the backdrop of 24 degrees slapping me in the face. Somehow it didn’t matter with the knowledge that in less than four hours a decade long tradition was about to renew itself with a new arm of the military for the 11th annual Bell Helicopter Armed Forces Bowl.

72 hours earlier there was an impressive luncheon that had keynote speaker Roger Staubach eschewing all the wonderful amenities that the good old US of A had to offer. Some wonderful thoughts about the importance of winning in the game of football. Even more so in reference to the game of life.

There is so much to capture your attention while on the field. The many proud soldiers of the military gathered to walk the flags of Texas and Old Glory provide a sense of pride and security. Being within two yards of the Blue Raiders of Middle Tennessee (8-4) and Midshipmen of Navy (8-4) as they do drills and warm ups in the morning chill provides an energy so powerful that one becomes ready to put on a uniform and go over the middle and take a pass for the team! The desire is that evident.

Referees will gather off to a corner and go over the rules, the protocols and other itinerary. Your ears are filled with the sounds of bands prepping for the halftime shows. The eyes also are privy to watching cheer squads go over routines and final instructions. You come to realize and sense their angst as a game is about to take place.

If you want to really feel the rush of nerves and energy before a game kicks off try standing right by the tunnel where teams enter and exit the field.

Eyes as wide as saucers and hearts as big as Texas. These are kids after all. The finality for some of these players looks to be in a quiet manner, more introspective. I assume these are the seniors.

If the old saying, “Act like you’ve been there before” is applicable my guess is that a whole horde of sophomores and juniors go through absolute hell in readying for the final moments before a game begins.

Everyone is ready for this game to get rolling! Once I see the men parachute their way onto midfield it’s time to get back upstairs and actually watch the game between Navy and Middle Tennessee State. The Midshipmen were enjoying a four game win streak while the Blue Raiders were at five in a row!

Navy drew first blood on a Keenan Reynolds qb keeper to complete a ten play 59 yard drive and a 7-0 lead. Middle Tennessee would get on the board with a 12 play 56 yard drive that culminated with a Cody Clark 43-yard field goal.

Navy’s lead would increase to 10-3 when stopped on a tough 3rd and 9 play by the Blue Raiders and the leg of Nick Sloan would connect from 32 yards out at 14:16 of the second period. For a second time Middle Tennessee would move the ball well between the 20’s yet not reach the end zone.

Another field goal-this time from 24 yards-by Cody Clark with 6:38 left in the half made things 10-6 Navy. A half where the Midshipmen dominated on the ground 125 yards to 48 while the Blue Raiders were optimal in the air 84 yards to 19.

There the score would remain until the 4th period when Keenan Reynolds would add another 100 yards on the ground and get two more scores in a 24-6 Navy win over the Middle Tennessee Blue Raiders. Some happy Navy teammates had fun passing the Armed Forces trophy around.

It was a pensive and well behaved bunch of kids inside the Four Sevens Room of Amon Carter in discussing the breakdown of the game. One witnessed by almost 39,000 chilly fans.

Navy would perform the triple option rushing to a tee, amassing 350 yards. Coach Ken Niumatalolo had nothing but positives to say about his teammates.

Another Armed Forces Bowl has come and gone. Once again Ft. Worth shined brightly on a really cold sunny day. If there is a better way to close out a year to welcome a new one, I’d like to know.

Special thanks to Cedric Bailey, Charles Boyd, Dominic Clark, Tim Simmons, and Bryan Delgado for the privilege and the hospitality.

Navy, you won nicely. Middle Tennessee you fought hard all year. See you in 2014! 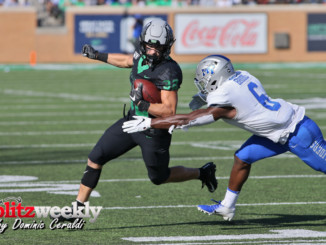