Last Tuesday night, the Dallas Stars traveled to Columbus to take on the Blue Jackets looking to get their first win of the season. Captain Jamie Benn, who was very critical of himself and the team’s performance after the loss to the Nashville Predators, had a huge game with a goal and three assists. Forward Tyler Seguin netted a hat trick as the Stars picked up their first win, 4-2. “The message between [Benn] and me going into tonight’s game is we needed to raise our compete level,” Seguin said according to NHL.com. “Our line needs to get going if we want to win games. We have a deep team but it starts from the front [to] back. Tonight we did a better job,” as he continued. Stars goalie Kari Lehtonen was terrific in net with 33 saves including stopping a breakaway shot from Blue Jackets forward Cam Atkinson about 40 seconds into the third period when the score was tied, 2-2.

The Stars planned to follow up their first win with another in Pittsburgh last Thursday night against the Penguins. The Penguins were able to quickly jump up, 2-0, thanks to two first period power play goals from forwards Sidney Crosby and Chris Kunitz. It looked like it would be a long night for the Stars, but they would turn the tide in the 2nd period. Stars forward Antoine Roussel would notch his second goal of the season thanks to a nice pass from forward Vernon Fiddler that would cut the Penguins lead in a half. Then late in the third period, forward Jason Spezza appeared to have scored his first goal as a Dallas Star tying the game up but it was waved off because of a questionable goalie interference call on Tyler Seguin. Instead of getting down, it fueled the Stars to really be aggressive and that paid off as Jamie Benn would score about a minute later to tie the score, 2-2. The game looked like it would go to overtime but a tripping penalty by Crosby would put the Stars on the power play where Seguin would score the game winner with about three seconds to go as they would beat the Penguins, 3-2.

“It was a huge game for us,” Lehtonen said according to dallasnews.com. “We had a horrible start, and we came back and I thought really played well. We need these to help build our team,” as he continued. The Stars improved to 2-1-1 on the season and were looking to continue the winning streak at home against the Philadelphia Flyers last Saturday night. The Stars had a 4-2 lead going into the third period before allowing the Flyers to score two goals to tie up the score. Spezza would finally score his first goal as a Star giving them back the lead, 5-4. It would not last long as the Flyers would tie it up again, thanks to the puck going off Stars defenseman Trevor Daley’s skate and into the net. The game went into overtime before Flyers forward Claude Giroux scored the winning goal on the power play as the Flyers would notched their first win of the season, 6-5.

After the game, Stars head coach Lindy Ruff was not happy at all about giving away the game. “We played stupid hockey. It was a lack of focus and when you play like that, you deserve to lose,” Ruff said. “When you have a two-goal lead, you can’t do what we did. Even on the fifth goal, we lost two guys on the forecheck for no reason. We let them come all the way up ice and that for me is a lack of focus. That’s garbage hockey,” as he continued. The Stars will try to get their first win at home against the Vancouver Canucks on Tuesday night. They will then have two days off before going on a two-game road trip to New Jersey to face the Devils on Friday night then at the New York Islanders the following night. 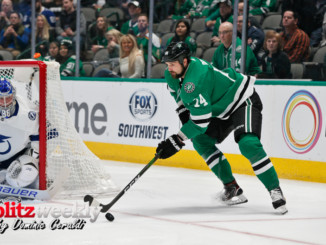