This should come as no surprise. If you remember what went down last year on Independence Day.

It was quick. It was swift. It had impact. It paid off dividends in the end when the Dallas Stars made their first trip back to the Stanley Cup Playoffs for the first time since 2008.

On July 4 last year the acquisition was for Tyler Seguin from the Bruins for Loui Eriksson. The Stars were a busy group of people during the free agent period during a day when most were sunning, having fun and cooking by the grill.

While there is no argument that Alex Chiasson has a heck of a future ahead of him. Chase now gets to hone his talents north of the border in Ottawa along with some future prospects in exchange for acquiring 11-year veteran Jason Spezza from the Senators.

Ponder that thought for a moment and as you do let’s see how excited Jason is going to be with the prospect of playing Center alongside Jamie Benn and Tyler Seguin.

“I think those two guys are phenomenal, phenomenal hockey players, and to think about being on a power play with those guys and to play with them, hopefully we can create some depth where it makes it difficult for teams to have waves of guys coming at you,” Spezza said. “It’s a great situation for me to be on a team with such talented guys, that’s for sure.”

Jim Nill didn’t stop there. Also this day he went on to acquire veteran right winger Ales Hemsky into the Stars family for a three year deal worth in the neighborhood of 12 million. It was 2013 all over again from where I sat. While pondering Jim Nill’s time as a Red Wing GM he was always very adamant about the idea of having great chemistry on the ice and in the dressing room.

Was that a selling point to get those two players to come to Dallas?

At 31, and with 11 years of hockey played in Ottawa don’t think for a minute that Jason Spezza’s best days are behind him. Can you say veteran presence?

“I feel like I have a lot of good hockey left in me and I felt really good about my game the second half of the season,” Spezza said. “I’m excited. I think I could bring a lot to a team. I’ve been around for a long time now, learned a lot and think I could pass that on in a different setting as well.”

Keep in mind that Hemsky and Spezza also spent some time together playing alongside one another in Ottawa after Ales was traded from Edmonton to Ottawa.

In a little more than a calendar year Jim Nill has addressed many needs to appease this franchise with youth (Valeri Nichushkin, Tyler Seguin, Cody Eakin) and veteran presence (Jason Spezza, Ales Hemsky, Shawn Horcoff) to make for a solid team presence.

Jim Nill still wasn’t done. Later in the day a backup goalie from Tampa Bay was brought to Dallas to back up Kari Lehtonen. A 26 year old named Anders Lindback.

From where I sit Dallas is once again a destination place for the hockey player. Expect more excitement at the American Airlines Center this fall… 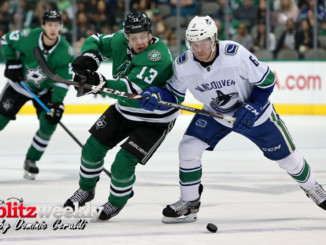