Was there a New Year’s Eve party the Dallas Stars’ players attended after their game against the Los Angeles Kings that has them so messed up they forgot that they have to play the 2014 portion of their season? Or is it playing against the Eastern Conference just been a bad run for them? I am starting to think both are at play here because the Stars have yet to win a game in 2014 and all their losses have come against Eastern Conference teams. They are currently on a six-game losing streak and do not seem to have an answer that will stop the bleeding. After how well this team finished the 2013 calendar year by going on a 5-0-2 run, it is hard to imagine that they would follow that run up losing six in a row. If you are a Stars fan like me, this has been painful to watch.

I think I have a few reasons on why they are struggling right now. First, they have not played their style of hockey for 60 minutes and when they do not, their opponents have been very opportunistic by cashing in on any turnovers committed by the Stars or because they have dictated play. For example, the two games against the New York Islanders the Stars had 2-0 leads after the first period only to blow it and lose. Last Monday in Long Island, the Islanders scored four goals in the second period and three in the third to go on and win, 7-3. It was an epic meltdown for the Stars. Islanders forward John Tavares had five points as the Stars had no answer for him. “That’s probably the most disappointing [game] of the whole year,” Stars head coach Lindy Ruff said according to NHL.com. “We were outskated. We couldn’t win 1-on-1 battles. They basically looked how we usually look. Their legs were better. Their energy level was better. Their puck management was better. That might have been our worst game of the year. It was a team giveaway,” as he continued.

You figure the Stars would exact their revenge against the Islanders six days later and get a win at home against these guys. Wrong. The Islanders would score four unanswered goals to go on and win, 4-2. Once again, Tavares would be a problem for the Stars as he would score the go-ahead goal in the third period. After the game, forward Ray Whitney talked about the Stars blowing the last two games. “When you’re struggling as a group instead of finding ways to win, you find ways to lose and that’s where we’re at right now,” Whitney said. “Lindy said it first that you’re not going to get a win until you’re in it. At times in the last two games, we’ve played like we deserved to win but in the end we’re not doing enough good things in the game to warrant a victory,” as he continued. The other game he is talking about was the one at the New York Rangers last Friday night where the Stars had the lead two separate times only to lose, 3-2. It appears this team is waiting for something bad to happen because they are not confident that if they play aggressive the whole game, they would get breaks to go their way. So they sit back and let the other team dictate things and hope they can hang on for the win. You cannot do that in this league if you want to win.

Second reason, their best players are not being their best players. Captain Jamie Benn and forward Tyler Seguin have struggled as of late to lead this team. Both have combined for one goal in the last four games and that is not going to get it done. Now, teams are concentrating more on shutting this duo down but then again that is what teams around the league do when they game plan for their games. How to shutdown the other teams’ best player(s). Benn and Seguin have to be more assertive on a consistent basis if they want to be considered great players in this league and lead the Stars to where they want to be.

And third reason, these Eastern Conference teams the Stars have played are a little bit smaller and faster than some of the teams the Stars are used to playing in the Western Conference. These type of teams tend to give the Stars problems when they can match their speed. The Stars do not want to be overly aggressive because it could lead to turnovers leading to odd-man rushes with the puck ending up in the back of their net. This has been the case the last six games all against the East. The Stars are a young and upcoming team that right now do not know how to find the right balance on when to push the tempo and when not to against speedy teams. This is something they are going to have to learn.

The Stars need to end this losing streak or they are going to fall all the way down the standings and for sure miss the playoffs for the sixth year in a row. They will get a chance to end this skid when the lowly Edmonton Oilers come into town on Tuesday night. Then another Eastern Conference team in the Boston Bruins will come here on Thursday night before heading out on the road to play division rival Minnesota Wild on Saturday night. 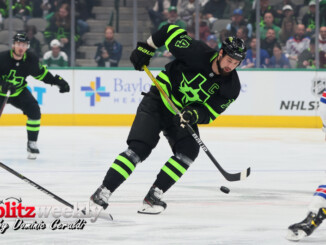 Stars fall to the Rangers 6-3

From Bad to Worse for the Dallas Stars