When a team has a losing streak like the current Texas Rangers, there’s a good chance their leader will directly address it which is exactly what Manager Ron Washington did after Sunday’s sixth consecutive defeat.

“I spoke to them and the message is nobody’s business in this room and I don’t mean any disrespect,” Washington said in the media interview room at The Ballpark in Arlington.”I just thought they needed to hear it from the manager. That was it.”

Whatever Washington said came after his team scored just eight runs in those six games that resulted in dropping to a 38-31 record, three games behind the Oakland A’s in the American League West. But the slump goes back even farther as the Rangers have dropped nine of their past 11 games and 11 of their previous 15. Since attaining a season-high 15 games over .500 on May 25 (32-17), they have won just six times and lost 14.

“They’re struggling right now but I believe in them and we’re going to move forward,” Washington said. “It happens. The thing you have to do is stay in it and fight. The only way you can get out of it is to keep battling.”

The struggling offense cuts throughout the lineup with an overall .219 batting average in June. During that span, the Rangers have scored just 39 runs, lowest in the major leagues. But like their manager, Rangers’ players don’t expect the slump to last much longer.

“I have a great feeling that things are going to turn around soon and this will be quickly forgotten,” said left-fielder David Murphy. “Sometimes you have a rough stretch like we’re going through but with the amount of talent, the amount of character we have in this clubhouse I think we’re really close to turning this thing around.”

Crucial Series with A’s Ahead
Though it may seem early for a key series, that’s exactly what the Rangers face this week when the Oakland A’s come to town for four games. That will be followed by a three-game trip to St. Louis to face the Cardinals.

There’s an eight-game swing available against Oakland so when the A’s leave town the Rangers could be anywhere from seven games behind to one game ahead and anywhere in between.

Oakland ended a two-game losing streak by beating Seattle at home Sunday to move to a 42-29 record. The A’s and Rangers have split six games so far in 2013 with Texas losing two of three at home in May.

Taking on the Cardinals
While the manager has switched from Tony LaRussa to Mike Matheny and many players have departed, the Cardinals have continued to be successful since beating the Rangers in the 2011 World Series. In fact, they enter this week with the best record in baseball at 44-25 even after losing two of three games over the weekend at Miami.

Three reasons why St. Louis continues to fare well are offense, defense and pitching, all three of which the team has been at or near the top in the National League all season.

Offensively, catcher Yadier Moina shares the major league lead in batting average at .352. Second baseman and Texas Christian University product Matt Carpenter and first baseman Allen Craig also are in the Top 12 in the National League at .320 and .313, respectively. Right-fielder Carlos Beltran has 16 home runs and Craig has 51 runs batted in, tops in those categories. 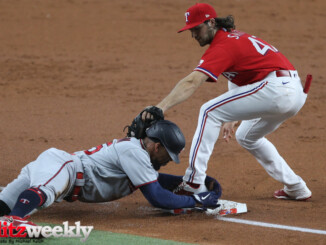 Time to Fear the Beard