Three out of eight exhibition games are now in the books for the Dallas Mavericks with a 1-2 record to show for it.

Monday night in Dallas was an instance in which long runs were a constant in the game.

Much like the opening home game last week with the New Orleans Pelicans the middle quarters were dominated by the Mavericks.

It was in the fourth quarter when the starters all laced up the sweatpants and rested that the second teamers for the Pelicans, Grizzlies, and Magic were able to make plays and create turnovers.

Last Wednesday Dirk Nowitzki was money with a 20 point game as Dallas nursed a 25 point lead after three.

Quarter 4 Memphis piled on the points (albeit five short) in a 95-90 loss in Tennessee. Still no Devin Harris or Shane Larkin (surgeries of the ankle and toe). Jose Calderon still nursing a bad hammy while Brandan Wright nurses a shoulder fracture. Hence, Gal Mekel is getting much playing time for now.

Monday night Dallas fell behind early by as many as 20 and worked their way back to a small lead before the 4th quarter would prove to the Achilles heel for Rick Carlisle’s team. Orlando jumped out to a 30-10 lead in the first. Dirk would go 19 of 24 for 24 points while Monta Ellis was 5 for 11 in the field goal department and tallying 16 points.

“Look, we’re down point guards, we’re down one of our best bigs, so the guys we’ve got have got to take up the slack and it’s not easy,” Mavericks coach Rick Carlisle said after his short-handed team’s loss. “You know, Orlando is an aggressive, young team and they were 0-2. They came out … and they were ready to fight all night long. We didn’t respond well early, but we did better as we got into the game. The challenge is to have the right disposition at the start, ’cause I told the guys all the games we play are going to be like this. I mean, teams are going to be coming at us. We’re going to be coming at them, too, but we’ve got to be ready for this kind of force. Early in the game we weren’t.”

Quarters two and three the Mavericks scratched and clawed their way back to respectability.

“I think we let them get in a rhythm and let them get too many points in the first quarter,” Ellis confessed. “It’s unacceptable, but then we did a lot of great things. We brought a lot of energy in the second quarter and in the beginning of the second half to come back and take a lead. We came up short, but we did a lot of positive things.”

If there is a positive or two to cull from this game Dallas committed only 12 turnovers while Orlando had 28. Conversely, the Magic shot 50% to Dallas’ 39%.

The amount of playing time Gal Mekel is getting at the point guard position (in addition to four more turnovers) isn’t lost on Dirk Nowitzki, either.

“We need [Calderon’s] ability to stretch the floor. We need his experience. You know, it’s tough for Gal right now,” Nowitzki said. “He’s basically our only point guard on the roster right now. … With Larkin out and Devin out, Gal is kind of the only guy. And I think he’s trying and he’s doing well, but he’s got to learn a few things. You know, he’s turning the ball over here and there, so he’s kind of got to adjust on the fly. But that’s what preseason is for, and it will help him in the long run to get better. He’s got to fight through it right now.”

If there’s thing that will fire up Rick Carlisle it’s being out rebounded. 54-32 on this night.

“The rebounding was poor and our rebounders have got to step up and help us,” Carlisle concluded. “You know, Sam had eight, but we need our other bigs to get more and we need our guards to help us. It’s got to be a collective effort.”

With the defeat the loss pushed Rick Carlisle’s career record in exhibition games to 48-36. His record as a Maverick is 18-18 since the beginning of the 2008-2009 campaign.

Dallas now takes to the road for two beginning Wednesday night for a 6pm tipoff with the Indiana Pacers (0-3). Indy played Sunday dealing with the indignity of 15 three pointers and 7 Rockets in double figures in a 107-98 loss. The game was played in Taipei, Taiwan.

To a better 4th quarter and 4th exhibition game. Saturday night it’s on to Charlotte followed by a Monday night game against Houston. The two home games with the Atlanta Hawks on the 23rd and the Pacers on the 25th back at the AAC. October 30th Atlanta will be the Opening Night opponent for Rick Carlisle’s troops. 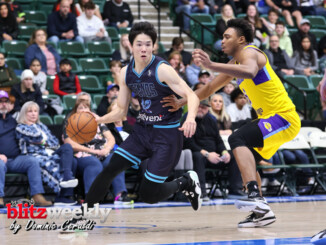