1 2 ... 4 ►
Photos by Dominic Ceraldi
FRISCO, Texas – The Fighters kept flight at home on Saturday evening, advancing to the playoff semifinal by defeating the Spokane Shock, 44-33.

The visitors wasted no time getting on the board in a penalty-riddled first quarter. Spokane running back Davonte Sapp-Lynch marched down the field punched it in three minutes into the game.

After the Shock’s Sawyer Petre missed his chance to open up a nine-point lead on his team’s next possession, his counterpart, Kristov Martinez nailed a 35-yard field goal early in the second period.

The ensuing line-drive kickoff ricocheted off of Spokane’s kick team and back into Frisco’s hands. Receiver Marques Rodgers capitalized, finishing off a seven-play, 37-yard drive with a six-yard rushing score. Another Martinez field goal, this one from 18 yards out, gave the Fighters a touchdown lead at the break.

Six minutes into the second half, Sapp-Lynch leveled the scoreboard with a 30-yard touchdown reception. DeMarcus Felton regained an advantage that would prove to be permanent four minutes later.

Along with his pair of second-half touchdown runs, wide receiver Manny Arceneaux secured Spokane’s desperate onside kick with a minute remaining. Felton then added to the lead with a two-yard rushing score.

With one second to spare in the loss, Spokane quarterback Charles McCollum became the IFL’s all-time leading passer with a four-yard pass to Jordan Jolly.

If the Arizona Rattlers are to beat Sioux Falls Sunday evening, Frisco will head to Massachusetts to take on the Pirates next weekend. 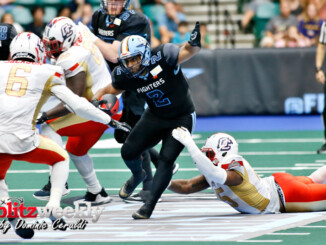 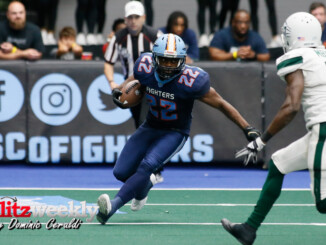 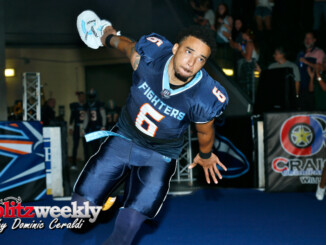 Frisco Fighters lose their first game of the season, 38-37.