However, the Mean Green are 2-0 at home this season so they should be the favorite going into Saturday’s game. The Mean Green have developed a recent habit of showing up big at home dating back to when Apogee Stadium opened in 2011.

The Mean Green’s defense will be tested early and often by the 5’10, 197 pound wide receiver, Kyle Griswould who has had his most productive games as a collegiate football player against the Mean Green.

His skill set, while similar to the 5’10 Brelan Chancellor of the Mean Green, is one of explosive capability and dynamism. Last year Griswould torched North Texas’ secondary for a career high 140 yards and two touchdowns.

“Oh, yeah, Griswould. We have seen him. We have seen a whole lot of him,” Coach Dan McCarney of the Mean Green said. “He has always really impressed me.”

It is no doubt that this guy will be on the mind of the secondary. What’s worse is that he is not even the most dangerous guy in that receiving core. Tavarres Jefferson leads the teams in both catches and yards.

Senior quarterback Derek Thompson of the Mean Green will be looking to air it out against a team that has allowed about 278 yards a game in passing. They have also allowed about 178 yards a game on the ground for a total of over 450 yards allowed per game. This offense has to be salivating as their offense struggled to really get anything going in their last game, a 24-21 loss to the Tulane Green Wave.

In this battle of the colors which one will come out on top? Like North Texas, and my money, I would have to say that color would be green.

FC Dallas Kicked Out Of US Open

The Hunter Versus the Hunted 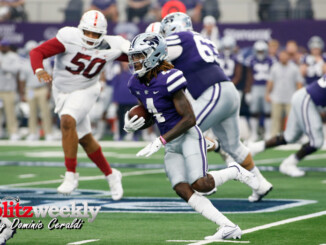