Officially autumn began at 9:49 pm in the midwest on September 22. As luck would have it, there was Monday Night Football going on in the East Coast while there was baseball and hockey going on here in North Texas.

Over at Globe Life Park fans of the Texas Rangers now get to enjoy what remains of a dismal season with the good news being a marked improvement in play with sweeps over the Athletics and Braves recently.

You might recall just how the American Airlines Center was when the Dallas Stars successfully ended a five year drought to get into the playoffs as a #8 seed and proceed to bring excitement back to the Metroplex with great play by men like Jamie Benn, Tyler Seguin, Brendan Dillon, Kari Lehtonen, and onward.

The team almost took the Anaheim Ducks to a seventh game in the first round of the playoffs. Alas in Game a 4-2 lead was lost in overtime as the Ducks advanced to the next round of play.

The energy of the crowd last April was electric. Lindy Ruff talked about it often.

Imagine the surprise that awaited the Stars players as 14,562 fans came to watch exhibition hockey with the Stars and their rival St. Louis Blues.

A game the Stars won by a 4-3 count with three goals in the space of nine minutes in the third period.

Kari Lehtonen patrolled the first 30 while new arrival Anders Lindback anchored the final thirty and proceeded to secure a 4-3 victory after the Blues took a 2-1 lead after two.

The energy level was sky high from the fans who had an added friend in the building. New mascot Victor E. Green.

It’s the first of three exhibitions before the season starts for real on October 9. Next week on September 29 and 30 there will be two more matchups with the Florida Panthers and Tampa Bay Lightning.

Nice win to start the fall. It’s going to be a fun time inside the AAC until at least April. 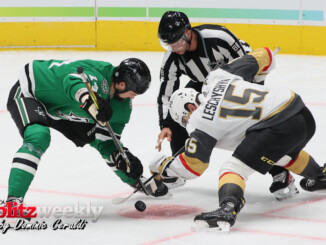 Stars dominate, but lose 3-2 in OT