While most of us at age 18 were worrying about which college we were going to apply to or who we were going to take to prom, J.R. Bareis, at age 18, has a much different story. You see, he’s been touring with the band Love and Death, featuring none other than Brian “Head” Welch, who recently reunited with KoRn.  Yes, that Korn. So while prom and college applications are so, uh, memorable, how about a European tour with a quick stop in Texas for a little something we like to refer to as the “Freakers’ Ball”?

Are you on any sleep right now or has that crazy tour schedule taken over yet?
I got a little sleep. We’ve been off for a little bit. So I’ve just been at home kicking it.  Been great.

Sounds like a dream.  You’ve been with the band now for three years, joined the group when you were just 15 years old,  did you ever imagine you’d be opening for Korn and some of the biggest names in music?
Well, I mean, I played since I was 11.  Just kind of at home – just kind of learned stuff that year and what not.  Then the opportunity came around when I was 15, so – it’s crazy.  It’s been a heck of a ride. I don’t know that anyone could have imagined what was coming.  I feel very blessed.

Do you ever think about what you would say to your teenage son or daughter in the future if they come to you and say, ‘hey, dad, I want to join a rock band’, do you think you’d be as supportive as your folks were, knowing what you know now from touring?
Now that I know all the work that goes into it, it would have to be – they would have to be really dedicated to it. They would have to really want it too. It was cool for me because my parents really knew that music was always what I wanted to do, and when the opportunity came they didn’t really want to say no because they knew that’s where I’m supposed to be. I’m very lucky to have parents that support me and what I’m doing.

It sounds like it.  I think a lot of parents can take a lesson from your folks in what it means to truly support your kids.
I really am lucky.

So let’s talk a little Freakers’ Ball.  I have to say, I’m a virgin when it comes to this event. What do you know about this event and is this your first time?
Yeah, that’s coming up this Friday (Oct.25, Verizon Theatre), and I’m not sure what it’s going to be like. It’s definitely my first time.  I know it’s been around for a while, you know, back when Brian (“Head”) was with Korn, I think they played it a couple of times. I think it’s mostly just a music type event, but we’ll see. Haha. You never know.

I guess if we don’t hear from you for a day or two following the Freaker’s Ball we’ll come looking for you.
Ha ha. Thank you. I would appreciate that.

You now have the extended addition of “Between Here and Now” available for purchase with a song that has quickly become my favorite called “Empty”, which you also happen to sing on, tell me what this song means to you personally and was it a long process?
Well, we actually had like three days to write that song. So we actually stayed up late at night and worked together. I wrote a little bit of lyrics with our bass player, producer and Brian, you know, we all kind of came up with ideas and just put it together. To me the lyrics talk about someone who just judges people and really doesn’t look at someone without judging them. A lot of people – I’m guilty of it too, you know, sometimes I’ll see someone and just think things that might not even be true, except I don’t know them or I don’t know what they’re actually going through in life and I think we’re all guilty of that at some point. So it really just talks about people that struggle with judging people, you know, you’re not better than anyone else.

I think it’s fair to say we are currently having a shortage of good leaders, do you see yourself stepping into the role of a mentor, community leader or something else a bit philanthropic?
Definitely, yeah. I’ve thought about that a lot. It’s cool being in my position because we’ve had a lot of younger fans follow us because of my age and it’s been really positive. Every day I get messages about people coming to the show, and during the show meeting people, who are really happy to see me up there and doing what I’m doing at my age. It’s cool to just be able to help people and giving them something they hoped for. A lot of people don’t have much hope out there and that’s what, as a band, we try to do when we perform. We just want people to have hope and be happy in life, you know. Going through life feeling sad or depressed, there’s nothing to gain out of it. We’ve all had our fair share of ups and downs in life, but we still always have hope. That’s something you can’t ever take away.

What can we expect to see from you in the future?
Well, hopefully, it will involve a lot of music. As far as the long term, I’m sure I will have a wife and some kids, but you never know. A lot of times when I think of the future my brain goes into overload. It’s crazy to think where I could go because of where I am right now. I’ve already done some pretty amazing things so it’s overwhelming to think what I could possible do from here. So for now I take it one day at a time and just hope that I’m still able to do some kind of music, somewhere.

For tickets to the 97.1 The Eagle’s Freakers’ Ball
http://www.kegl.com/pages/prog/freakers/ 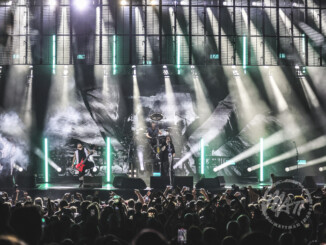 Cowboys Run Saints Out Of Texas