MEMPHIS, Tenn. — FedEx Corp. and Junior Achievement (JA) Worldwide today announced the return of the FedEx Junior Business Challenge, a program in conjunction with the PGA TOUR that provides the next generation of entrepreneurs an opportunity to pitch original business concepts at tournaments during the 2017-18 season.

FedEx Junior Business Challenge qualifying events will be held at four PGA TOUR tournaments this season, with the first teeing off at the World Golf Championships-Dell Technologies Match Play in Austin, Texas, on Tuesday, March 20.

JA students ranging from 15 to 18 years old will pitch their team’s business, innovative products or services to a panel of high-profile judges.  One JA student company from each qualifying event will be selected to move on to the FedEx Junior Business Challenge finals at the TOUR Championship and 2018 FedExCup finale at East Lake Golf Club in Atlanta for a chance to receive a $75,000 donation to their local JA chapter from FedEx.

“We were inspired by JA students who participated in last year’s FedEx Junior Business Challenge and presented innovative, dynamic thinking with real-world solutions,” said Patrick Fitzgerald, senior vice president, Integrated Marketing and Communications, FedEx.  “We’re honored to bring the program back for its second season and look forward to working alongside the PGA TOUR and JA to help empower the next generation of entrepreneurs and business leaders.”

The judging panels throughout the FedEx Junior Business Challenge program will comprise an eclectic mix of personalities and diverse backgrounds, including PGA TOUR players and other professional athletes, business leaders and media personalities, providing JA students with a broad range of perspectives and signifying that no two paths to success are the same.

2003 U.S. Open (tennis) and former ATP World No. 1 Andy Roddick and three-time PGA TOUR tournament winner Pat Perez are slated to join the panel at the first qualifying event being held at the WGC-Dell Technologies Match Play on Tuesday, March 20.

Since 1996, FedEx has donated nearly $14 million to JA Worldwide in support of small businesses and the entrepreneurs of tomorrow.

The FedEx Junior Business Challenge is part of the FedEx Cares global giving initiative, in which FedEx is investing $200 million in more than 200 global communities by 2020 to create opportunities and deliver solutions for people around the world.

With members in more than 100 countries, the JA Worldwide network reaches more than 10 million young people around the world every year.

“As we saw in its inaugural season, the FedEx Junior Business Challenge provided JA students with an enhanced platform to showcase collaboration, curiosity and innovation that goes into the development of their company concepts,” said Asheesh Advani, CEO, JA Worldwide. “It’s great to see the program return for a second season and expand its reach by hosting a qualifying event in Canada.”

FedEx has been an official sponsor of the PGA TOUR since 2002.  In 2007 the FedExCup—a season-long competitive and promotional platform—was introduced, transforming the competitive landscape of the PGA TOUR.  The performance-based point structure culminates with the FedExCup Playoffs, a four-tournament playoff at the end of the season to determine the FedExCup Champion.

“Since becoming a partner of the PGA TOUR in 2002, FedEx has made a conscious commitment to making a positive impact in the communities that host tournaments, not only in the United States but across the world,” said Brian Oliver, executive vice president of Corporate Partnerships for the PGA TOUR. “We’re thrilled for the FedEx Junior Business Challenge to return for a second season. The ambition, innovation and teamwork demonstrated by the young men and women who participate is truly impressive, and we know that our tournaments are looking forward to hosting the JA students throughout the PGA TOUR season.”

To learn more about the FedExCup, visit PGATOUR.com/FedExCup. 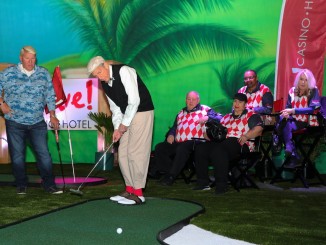