Disney has been on a roll as of late. Their acquisitions of Lucasfilm and Marvel have allowed them to capture the interest of audiences they had struggled to in the past. Blockbusters like Captain America, Star Wars, and Guardians of the Galaxy have allowed the company once reliant on Mickey Mouse to stay relevant.

In the same time, however, Disney has continued to make its own movies. There have been monetary failures, such as the underrated Princess and the Frog, but there have been even greater successes with films like Tangled and Frozen. Each film has showed that Disney is still in the business of making their classic children’s movies despite the varying degrees of success.

Zootopia is in the abject success category. The movie is going to be mentioned in the same breath as both Tangled and Frozen as a film that bridges the age gap and speaks to both children and the adults that bring them to the theaters and every college age person in between.

It is a Disney movie to be completely honest. There is tragedy, pain, emotions to be toyed with but at the end of the day good will triumph over evil and characters will be redeemed. The movie features anthropomorphic mammals who live in a world where predator and prey live together in perfect harmony. The titular Zootopia is a New York style metropolis that represents the pinnacle of animal peace.

The main characters are a bunny who is attempting to live out her dream of becoming a big-city police officer after leaving her rural carrot-farming roots and a fox who is a sly con-man slightly outside of the law. Both are wonderfully written fleshed out characters who have triumphs and pain that make them the characters that the audience first meets. It never feels like they are simply characters of this movie but that the circumstances that have been presented in their off-screen life have impacted who they are and how they act.

The plot is a crime drama. It’s about a detective tracking down missing animals with the help of a fox unafraid to bend the rules. The plot itself is the weakest part of the movie as it serves only as a device to get characters from one place to another and not really growth.

The heaviest topic that Zootopia deals with is prejudice and stereotype. Because the characters are animals there is no one to one ratio about who is stereotyped in real life and how this is depicted in the movie. What is shown is that prejudice is hurtful and damages people. Preconceived notions are a way to minimize people and not give them a chance.

The bunny is simply stereotyped as cute and useless in anything else because of how small she is. She, according to other characters, is better suited to be a carrot-farmer and nothing more. The fox is shown to be untrustworthy in this animal world, he is simply sly and most likely a con-artist. These are simply and silly points but they do have real life examples.

This film is in no way a heavy movie. It is funny, light, and has references for all ages. It’s another Disney classic and well worth seeing. Better than Frozen and less singing too. Go check it out. 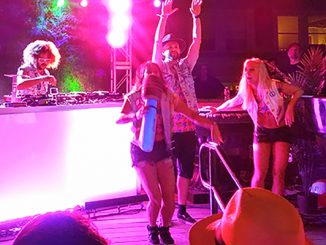