The band Ume are really good and has the tough riffs to back up everything. I was actually surprised that they hit that hard. They are playing their instruments like it’s the end of the world. No Pro-Tools in sight. Ume genre-hop a lot.

They come from Austin, Texas, and Austin is considered the music capital. There are other cities, towns, states, and countries that are always in the running for that title. HA!

Lauren Carson is the vocalist and she knows how to mix her vocals up well. She probably gets compared to Kim Gordon (Sonic Youth) and Courtney Love (Hole).

I think that she rocks kind of like Alison MacInnes from the band Fifth Amendment, Tracy Bonham, PJ Harvey, and Kathleen Hanna. Lauren is raw but still is nice enough to teach young girls how to rock.

The entire band believes in working hard, so their shows are excellent. They have accumulated a loyal following through those performances. Ume formed about 7 years ago. They certainly believe in the do-it-yourself-style; regarding their promotions.

They are not concerned about being the next big things. They just want folks to respect their rowdy output every time. They continue to pay tons of dues and get rewarded for some of those.

They demoed the song Pendulum at Club Deville on April 25, 2008. It is a rocking, good time for the audience surely. They self-released the great EP Sunshower in 2009.

Ume unleashed the album Phantoms in 2011. The songs Captive and Run Wild are wonderful, so is the rest of the album. You can tell that they enjoy what they do. You will be proud to listen to this band’s whole discography. Their brand of rock is also smart and bold.

That band recently released their latest LP Monuments on March 4, 2014. They actually got heavier on that album. I’m glad that they did, because rough riffs rule. I highly recommend listening to the whole album. The proof is always there. The songs Black Stone, Embrace, and Chase it Down are tremendous.

Lauren did the Acoustic 4-A Cure Benefit with Nancy Wilson (Heart) on May 1, 2014. Lauren has a good heart as you can tell. Do not get her mad though. She’s also a tough lady that attended grad school. 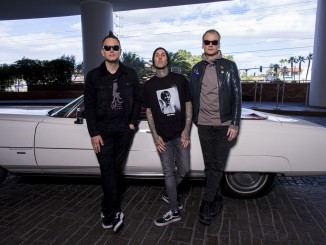