Coming into play this weekend the Houston Astros knew there was one team whom they could lay claim to dominating this 2013 season.

In fact, this was the only team the Houston Astros could make this claim for when the Los Angeles Angels of Anaheim made their way into Houston Friday night.

In their 9-7 Friday night win there was a moment that some might call the highlight of the season.

You had Cody Clark, an 11-year veteran who continued to persevere to play in the Majors-mired in an 0-for-25 slump-getting his first hit and the six run explosion that followed.

Brought on to help a catching crew that is depleted by injuries his hit to center field elicited an ovation from the stands, and the dugout. Pretty nice moment I dare say!

“It was amazing,” Clark said. “I can’t even describe it, because they’ve been so supportive of me. Every day they’re telling me, ‘You’re going to get it. Don’t worry, you’re going to get it.’ It was good to score a run and get in there and give them all high-fives and hugs.”

Any pressure placed upon Cody Clark himself after struggling the first ten games?

“After the first three or so games, I wasn’t really pressing,” he said. “I was taking some decent at-bats. The past two or three or four games, I’ve just been pressing a little too much and swinging at everything. Before the game I felt really good, and I just felt really calm and relaxed tonight. I didn’t really think about it and just felt good today.”

“I think that was one of the happiest moments of the season,” manager Bo Porter said.

A Matt Dominguez grand slam also gave Bo Porter and team reason to be happy with the 9-7 win despite a poor outing by Dallas Keuchel. In allowing six runs in 5 and 2/3 innings Dallas has now allowed 11 runs in 9 innings. Not the way he’d like to finish out 2013.

“Luckily we got out of there with a win, but I can’t pitch like that,” Keuchel said. “I know I had nine strikeouts, but giving up six runs is not what I like to do.”

It was the second time in 2013 the Astros accumulated a four game winning streak. Two road sweeps yet still sweep-less in Houston. With the win Friday, Houston took a 10-7 series lead over the Angels. Saturday night they fell to 10-8 with a 6-2 defeat to Team Scioscia. 21,903 were hoping they would see the first five game winning streak of the season but that was not to be despite Brett Oberholzer getting into the sixth inning of play and only allowing four runs.

“You look at his body of work, he did pretty good job of getting the game to the sixth inning,” manager Bo Porter said. “But I was talking in the dugout, he just didn’t look like he had that pinpoint command, that late life that we had seen in a lot of his previous starts.”

Brett responded to the high pitch count through six innings.

“Command got away from me a little bit,” he said. “In the first three innings, it was probably my best command all year. I felt like I was spotting my fastball pretty well. I kind of let up a little bit, I guess, in the fourth, and they got three or four batters there where they got RBIs and capitalized.”

Sunday the Astros were going to start the day in a different manner. The players and staff would begin their way at the turnstiles greeting the fans and showing thanks for a first season in the American League that yielded few good stories. From the collective side, this is a team that is going places in the years to come. The starting pitching has been impressive all year.

Earlier in the week the Astros completed the sweep at Safeco Field by scores of 6-4, 13-2, and 6-1. In Wednesday’s finale Brad Peacock was money for the third time in four starts. At one point retiring 14 of 15 batters faced and making a case for being a part of the staff in 2014 and onward. Alongside Jarred Cosart and Jordan Lyles, the Astros starting pitching allowed two earned runs in the Mariners series.

For the month of September the Astros are playing .500 ball with a 7-6 mark coming into play. 51-97 through Sunday morning. Houston batting .353 with runners in scoring position in September. The focus now for the next 14 games or so is a strong finish to carry over into 2014.

“Our starting pitching has been outstanding,” Porter said. “When you pitch well and you swing the bats and give those guys a little bit of a cushion, it allows them to attack the zone that much more, and I feel like they’ve done a tremendous job with that all series.”

Based on a slow start Houston did set the American League record for strikeouts in a season with 1,393. Nine happened on Saturday and surpassed what the 2012 Athletics amassed with 1,387. Thankfully the all time record of 1,510 by the 2010 Arizona Diamondbacks appears untouchable and safe. 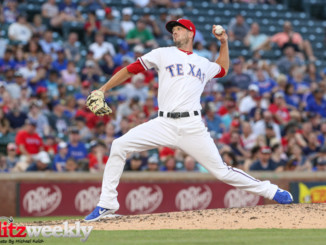