The July 31 non-waiver trade deadline came and went without the Texas Rangers trading any more players. That does not mean they will not make any additional moves. It will be a little harder to do it, though. The Rangers can still trade a certain player to any team but that player would have to clear waivers for the move to successfully go through. The deadline for this is on the last day of this month. Rangers right fielder Alex Rios, who was one of the few that was speculated to be moved at the deadline, does not believe he is here to stay just yet. “I’m not off the hook yet,” Rios said according to dallasnews.com. “But as of right now, I’m content to just focus on baseball. I’m just going with the flow. My duty is to come out and play the game,” as he continued.

The Rangers did make a small move this past Sunday when they claimed outfielder/first baseman Mike Carp from the Boston Red Sox off waivers. He will be auditioning for spot on the roster for next season. According to dallasnews.com, he has spent more than a few times on the disabled list which is why he only has 86 at-bats and his batting average is .198 with no home runs and nine RBIs this season. To make room for him on the roster, reliever Alexi Ogando has been moved to the 60-day DL which ends his season. In other injury news, Rangers general manager Jon Daniels announced three other players will not play again this season. Reliever Tanner Scheppers along with infielders Kevin Kouzmanoff and Jurickson Profar will have to wait until next season to play ball again for the Rangers barring any one of them gets traded. Kouzmanoff is dealing with back issues while Scheppers is having issues in his elbow. Profar, who had a setback earlier in the season which prevented him from coming back sooner, could play in the Arizona Instructional League in October if he is shown to be fully recovered from a torn muscle in the back of his armpit according to dallasnews.com.

As far as the season is going, it is more of the same for the Rangers. They did take two of three at home against the New York Yankees to wrap up a six-game home stand with them finishing a 3-3 record. They had a day off before traveling to Cleveland for a three-game series. In the first game, the Indians pounded the Rangers, 12-2. Recently acquired starting pitcher, Jerome Williams, had a rough outing. He surrendered ten runs off 13 hits in four-plus innings. I think this is a game he would like to forget about. “Not executing, that was basically it,” Williams said according to MLB.com. “When I did execute, they found holes. It’s all on me. This is what happens when you don’t execute. [I] also walked three guys. That’s not me. I try to attack hitters. That’s unacceptable,” as he continued. In the second game of the series, the Rangers only gave up two runs. The only problem is that they could not score any for themselves as they were shutout, 2-0. To avoid a sweep, the Rangers had their ace pitcher Yu Darvish on the mound. He certainly pitched like one giving up one run while striking out eight in seven innings as the Rangers had a 3-1 lead going into the bottom of the 9th inning. Unfortunately, closer Neftali Feliz could not complete the save as former Ranger David Murphy hit a two-run shot to tie the game. The game went into extra innings and in the bottom of the 13th inning, Indians outfielder Michael Brantley hit a walkoff home run to beat the Rangers, 4-3 and sweep the series.

The Rangers still claim the worst record in all of baseball at 43-68. If there is any type of a consolation prize here is that the Rangers will have the first pick in next year’s draft should they finish the season with the worst record. If you are into tanking games the rest of the way, then seeing the Rangers lose is not such a bad thing. They will take their losing ways to the Southside of Chicago for a three-game series against the White Sox starting Monday night. They will have the day off on Thursday before traveling to Houston for another three-game series against the Astros on Friday night. 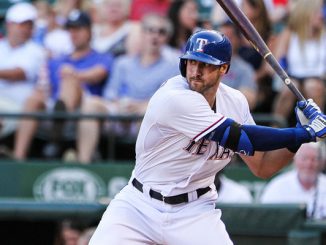